Sad news from Bashiok, as he confirms that the gruesome, “bite off your head” death animations are not going to be in the game. 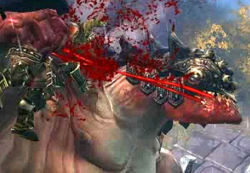 Unfortunately we never managed to get these implemented. They were a really cool idea, but a pretty huge amount of work. The one we showed of the

Siegebreaker was a scripted sequence we set up specifically for that video. It was never implemented, and never actually worked without someone sitting there typing in a bunch of commands to get it all to fire off properly. It’s still something we’d like to do, though.

All things considered there are just higher priority tasks sometimes. We’d love, for example, to have the monk display his weapons during all of his skill animations. But it’s an enormous animation and effects investment to get it done, and we have to weigh all of these things against other features and polish. A lot of the skills we could improve have multiple animation sets, multiplied twice for each gender, and then multiplied by each weapon type he can equip. That can be 40 or more unique animations, and then there’s a full FX pass, approvals, QA testing, etc. etc. and that’d just be for 1 skill.

We have our wish lists, but it’s a balancing act of resources. Ideally our choices when balancing go toward setting realistic limitations, and producing the best game possible.

The pic to the right is what the OP was asking about, and it shows

Siegebreaker Assault Beast making the Barbarian’s neck look like a Twizzler in the WWI Gameplay Movie, which was our first look at Diablo III, way back in June 2008. Sad to hear now that it was never actually functional, and only worked via special commands. I’d make some jokes about how they could have done those gory bonus death animations without reworking the entire

town portal system four times and winding up right where they began, but I don’t want to deprive you guys of that joy in the comments.

The video is after the break if you want to refresh your memory of the spectacle.