PvP in Diablo III. In them he restates the fact that D3 will not have any form of PvP when it launches, and nothing will be enabled for PvP until they can patch in the full Arena system at some point in the future.

Speaking from Taiwan earlier this week, Jay Wilson said they hoped to get the Arena patched into the game sometime later this year, but we all know how Blizzard is with words like “hope,” “later” and “this year.” (Hey, at least Jay didn’t say, “

So there’s no plans for dueling at all? I thought Jay had said awhile ago that Blizz planned to implement dueling in some form, and he wanted to also have hardcore dueling to the death. Does this mean it’s totally canned? Or considered for a patch in? Or maybe an expansion? 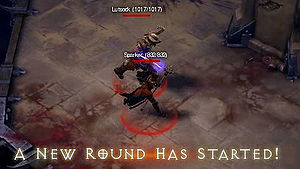 We’re open to the idea of custom PvP matches, which would allow for duels in the arenas. There are a lot of decisions before we can get there, but on the design philosophy front we don’t have anything against practice duels or other custom matches (1v4?), as long as they can’t be used for progression. It’ll just come down to implementation and what we’re able to pull off in a timely manner.

…While we’re talking about PvP it’s probably worth reminding everyone that what we’re targeting is a very loose and ‘for fun’ system. Imagine clicking a button, being matched up against another team of equal skill and gear, and win or lose you move forward (although faster if you win) on a personal progression system that gives you some cosmetic recognition as you go. There won’t be ladders or leagues, we have no intent to expose team ratings, and very likely nothing besides a win/loss record to track performance etc. etc. etc. Anyone who has tried it at BlizzCon knows the PvP in Diablo III is a blast, but I’ve seen some people start to get ideas that it’s going to be an eSport, and that’s just not something we’re targeting – for the sake of our goals in the single player/co-op experience.

It’s one reason custom matches can make some people nervous, because it means players can start setting up their own games in attempts to create a more competitive system. Or just complaining their 1v1 duels aren’t balanced. When that happens people start demanding the sacrifice of PvE, “I need more mobility/stuns/dps”, separate systems with different abilities, and on and on. I think if there were one good argument against duels and custom games, it would be the players themselves. 🙂

There won’t be any PvP in Diablo 3 at launch

Click through for a couple of follow ups, though the first two posts above cover all the main info.

uhh I still don’t get it. If you balance PvP and PvE separately, this issue of one’s balance affecting the other would never occur.
Aside from some very basic user experience issues it would cause, and which we vehemently oppose, asking us to design, balance, and maintain two separate games just isn’t reasonable.

So my next question would be, why is it going to take so long to implement if it isn’t supposed to be something so central to the core mechanics of the game?
How do you know how long it’s going to take? 🙂 Jay says it’ll be this year and everyone assumes that means December?

No offense Bash, but you guys ARE Blizzard =)

You should be astounded that people actually believe that it will be “this year” when you guys said this year. hehe
Fair enough…

My concern is the strict queuing of players with similar gear and skill in arena.

Don’t get me wrong, I think it’s a great idea to be matched with equal gear and skill players, but sometimes in Diablo II, don’t you sometimes have the urge to enter Public Dueling Games, and pubstomp lesser geared and skilled players with those godly items you have just found or crafted, just to exert your dominance? If all the players you face scaled with your gear, there may not be a great incentive to get better gear, since if you get a windforce, chances are, you will then be upper to face other players with windforce.
In a balanced system (and if we’re matching you correctly) you’d win 50% of the time, and lose 50% of the time. It absolutely feels awesome to win, but for someone to win someone else has to lose. The ‘fun’ comes from being matched fairly and overcoming a challenge. Yes some fun can come from just being totally overpowered and dominating, but for most people that gets old and they’ll just stop playing if there’s no challenge.