KuangTu of Diablo3.cc let us know that the new August issue of PC Gamer has a one-page feature on Diablo III, with new information about the

Followers. We’ve been asked not to post the scan, so here’s the key info transcribed from the page.

…your followers will chime in during dialogue or with playful banter as you adventure. For instance, “The Scoundrel will flirt with the female Wizard, and she’ll flirt back,” Martens explains, “But when he flirts with the female Monk, she’ll tell him, “You have no chance.”

There are also details about nine of the Followers’ skills. We knew the names of all their skills from the Followers’ Video, but the functions of them haven’t been elaborated on just yet, so this is cool to see.

Dirty Fighting: Throws dirt in an enemy’s face, and scrambles in an attempt to wedge the player between him and danger. (Coward.)

Bandage: A straight-forward heal that Lyndon will use when you’re badly injured.

runes while adventuring with him. 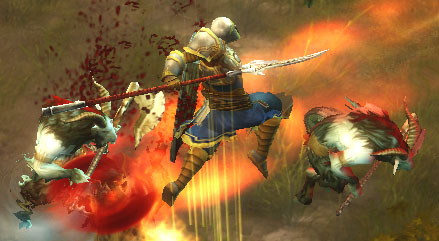 Intervene: When your health gets low, Kormc will taunt all enemies near you for eight seconds.

Tribute: Increases all gold you pick up by 20%.

Energy Bomb: Damages enemies near the player, and also heals you and gives you life-steal for 15 seconds.

Energize: Instantly replenishes your resource to its maximum amount.

I find Blizzard’s avowed “Followers will only be viable on Normal difficulty” a little more understandable, looking at how powerful some of these skills are. I’d still like mercs who could remain viable throughout the entire game, since I like the added strategy of having a helper who is really powerful in some ways, and yet who requires constant management on my part to remain alive.

But if these Followers with these skills were

end game viable, that would be crazy. Instant full resource refills? Rune find bonuses? Automatic healing? Those sorts of bonuses should come from items, and fairly powerful items at that. Being able to add them just for fun, from Followers, would be unbalancing. Or is that the whole point/attraction?

On the other hand, even with these abilities, you could argue that the Diablo 3 Followers will be weak sisters compared to their D2 predecessors, who could add enormous damage plus multiple aura bonuses from high level equipment.

DiabloWiki Watch #63: Followers, the Armory, and the Butcher