Thanks to Risingred for finding a video showing off the

followers in Diablo 3. The guy who posted it on YouTube says he got it from the official Korean D3 site, though it’s not showing there anymore. Apparently this is another case of that site posting official news slightly before the US site was ready. Calculating times zones is indeed tricky. 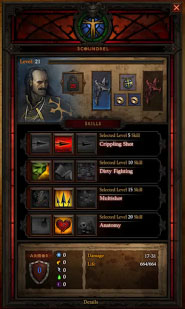 There are three choices of mercs, the tanking

Enchantress (who I think we should just all agree to call the Flux, to make up for my namesake’s uselessness in D2), or the xbow-using

Scoundrel. Presumably you’d pick one that complimented your play style, or filled the holes in your character’s damage output. Generally speaking, you’d probably want a Templar to tank for your Wizard or Demon Hunter, a Witch Doctor would want a Scoundrel to add ranged physical damage to his elemental attacks, a Barb would want an Enchantress to add elemental damage to his physical smashing, etc.

From what the video shows of their interface, the Mercs each have 4 tiers of skills, with 3 skills to choose from in each. Their equipment options are more limited, with just left and right weapon slots, plus 2 rings and an amulet.  That’s certainly one way to increase the value and desirability of jewelry; by including these mercs and basically doubling the number of good rings and amulets every character needs.

The official Blizzard page has not yet been updated with the full Followers info, but we should see that shortly.

Update: Images! Thanks to RisingRed for grabbing screen caps of all the concept arts plus the tier one, two, and three armor looks. You can see all of those in the Followers gallery; the concept art pics are embedded below.

Bashiok says the full feature reveal is coming tomorrow, and that a lot of our early assumptions may be incorrect.

I’d recommend everyone back down from their perceptions of what they believe is true, because tomorrow, from my perspective, everyone is going to be eating crow.