This article was added as a little stub some time ago to DiabloWiki and has with the help of Flux and me evolved into a full monster article. Much like the Morlu Caster, it’s a monster which information has been gathered without an official announcement by Blizzard; the name is therefore obviously still under speculation…

The Fallen Queens have not been seen on

Sanctuary in the last few decades, and the documented knowledge of their existence before this is sketchy at best. Keeping to the fiery pits of Hell, they have been producing their horrible offspring in peace – procreation being on of the favourite pastimes for Fallen besides ripping things apart.

With an ever escalating demonic battle, the procreative Fallen Queens can now be found on the mortal plane, supplying the demonic ranks with more nasty little buggers.

To properly give information to this new monster introduction, we’ve also polished the main Diablo 3 Fallen One monster page. If there was ever anything you wanted to know about Fallen, don’t miss the updated background.

The D3 Team has said that there are more types of Fallen yet to be revealed, and some sort of giant, insect-like spawning unit, perhaps called a Queen or a Mother, seems a safe bet.

The silhouettes of six types of Fallen were shown during a panel discussion at BlizzCon 2009; the five known types and one huge, blobby giant, which most fans immediately assumed would be a spawning unit.

During the Monster and Art panel at BlizzCon 2009, a slide was shown with the silhouettes of various Fallen. The Imp, Hound, Shaman, Overseer, and Lunatic are easily recognizable, but what’s the huge blob in the centre? (about 2:40 in) 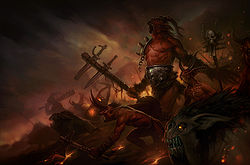 No one from Blizzard has ever spoken of a “Fallen Queen” but the question of where all these male warriors come from has often been asked by fans, without any adequate answer being provided. A huge, egg-laying queen of some sort seems a viable answer, and that center silhouette certainly doesn’t look like an ambulatory combat unit.

For more speculinformation, head over to the Fallen Queen article. If you have input or insight, don’t be shy either, just add it under a new headline in the wiki.