That’s what the @Diablo Twitter feed says the developers were hard at work on, before their holiday break.  Well, that’s not exactly what it says, but you can judge for yourself:

A big push on armor sets in the milestone before the break, which included a new female wizard unarmored look.

Huh? Armor sets that include unarmored look? Presumably these “armor sets” are not “

item sets” but instead refer to the look of the character(s) in a variety of types of armor. Things are clarified a bit on the Facebook.com/Diablo update.

There was a big push on armor sets in the milestone before the break, which included a new female wizard unarmored look. Also sometimes referred to as a class’ “naked” look. They’re not actually without clothing, but it’s the look of a character when wearing no pieces of armor.

That makes more sense, though it’s a bit less titillating. It struck me as odd though, since in my memory the female wizard’s outfits have been glorified bikinis. Haven’t we been seeing her unarmored look all along? 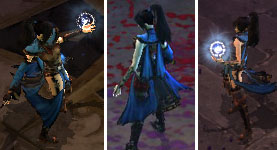 No, actually. This I realized when I went back and looked through the available imagery: cinematics, concept art and screenshots.

The Wizard, female as well as male, debuted half-naked in concept art, but in every shot since then they’ve been fully-dressed. Her outfit in screenshots is always this blue costume with a big cloak, and that appears to be the same outfit that she’s wearing in this dramatic painting. Which looks revealing, but is just shorts with a jacket. And cape, of course. Wizards are big on capes, having never employed Edna E. Mode as a costume designer. (Happily, Diablo 3’s mythological setting should keep them safely clear of jet engines.)

So no, we’ve not seen the wizard in her “naked” look, (though some of the fan art comes fairly close), and can look forward to more variety in the character’s garments (perhaps even sexy outfits?) in the future. Assuming, of course, that Blizzard ever releases any more imagery from their game. Blizzcon 2009 took place in late August, so we’re coming up on five solid months without so much as a screenshot! 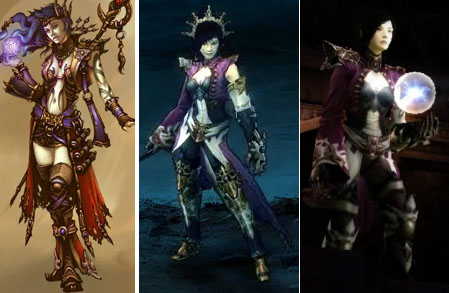 Still, the Wizard could probably never be as “naked” as the good old

Sorceress used to be… Not even panties!

Some of you have suggested your own ideas on how a ‘naked’ wizard should look.