A few more reports on Diablo 3 from the Penny Arcade Expo have surfaced today, as travelers return home and write up their experiences.

By far the best such report was posted in our main D3 forum by Zagreus, following up his initial report from a couple of days ago. Here’s a short quote from what he said about monsters; check the thread for much, much more on a wide variety of game elements.

Monster Prefixes included Champion, Fanatic, and Possessed. What I’m going to call Affixes for the time being, which appeared in yellow, below the monster names, that I managed to right down were as follows; Electrified, Plagued, Fast, Magical, Frozen, Stoneskin, Cold Aura, Doppelganger (which I erroneously reported as and enemy type yesterday), Molten, and Powerful. Molten was the only Affix that was not attached to a Unique, making the Bone Warrior [Molten] less powerful than a Champion Bone Warrior, but more powerful than a non-affixed Bone Warrior. All the Uniques had at least one, if not two Affixes.

Uniques that I managed to catalog are a follows: Death Froth [electrified] was a wasp. Spirit Hawk [plagued][fast], Bile Feast [magical], and Rust Raven (was too busy dying to note her affixes) were all Lacuni Warriors. Haze Fuse [powerful][cold aura] and Pit Thorn [frozen][stoneskin] were Tomb Viper/Serpent Maguses.

ThatVideoGameBlog.com has posted a short writeup of their hands-on experience at PAX.

…Two things that are very different that I noticed in the small demo were checkpoints, and reviving teamates. When I died in the demo, the game waited to see if a teammate was ready to revive me with a skill or potion and when no one did, I was resurrected at the last checkpoint which was close by. This is markedly different from Diablo II, in that I had all my equipment and did not need to worry about whether I dropped a portal or had to walk to my body from town, I just got right back into the action. I don?t know if this is a positive change or a negative one just yet, I am really biased to Diablo II, and I am not sure if those checkpoints persist when the game is turned off. One thing is for sure, it?s fun.

GameStooge.com posted their Final Thoughts on PAX with a mention of Diablo 3.

(Tie) Left 4 Dead 2 and Diablo III. Nobody seemed to be bothered about the bright friendly color palette of Diablo III, although half the demo stations were playing in a brown desert environment instead of the bright green forest setting so maybe that had something to do with it. I didn?t see anyone whining about Left 4 Dead 2 coming out too fast either. 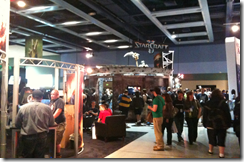 Neowin.net has a photo gallery from PAX, with one shot of the Blizzard booth and a short comment about it:

The Blizzard booth dominated the show. They had Diablo III, Starcraft 2 and World of Warcraft. I would go as far as to say that the Blizzard area was more popular than the next 5 most popular booths combined.

The SF Examiner’s gaming blog has a PAX report with a mention of Diablo 3 near the top.

Diablo 3.  I know there’s plenty of coverage on this but I had to play the Barbarian, because that’s how I roll.  The station I played on had a roughly level 4 Barbarian running around a desert landscape.  He was mostly getting pestered by insects squirting stuff at him.  The Foot Stomp attack really made me happy, you can stun a lot of enemies all at once and the sound/graphics on it hit the right buttons for me.  I also liked the improved level map.  Improved over Diablo 2, if you don’t recall that, it was basically a line drawn overlay that also impeded what you could see on the game itself.  Diablo 3’s map is a now in the upper left corner, providing you some info and not getting in the way.

The visuals on Diablo 3 are very well done.  It reminds me of WoW in a way, but grittier.  I’m having a hard time finding the right words to describe the differences.

Is Blizzard leaving its 1990s PC gaming roots behind?