Bashiok was busy in the forums late Friday, following up his initial round of Followers posts with more defenses of the newly-revealed game feature. Quotes, all from the same thread:

Followers were originally going to be available during co-op, and actually are right now because of a bug in the current build we’re playing. And it’s crazy. If you’re unfortunate enough to also have a witch doctor, it’s insanity. Eight characters running around plus all of the potential pets. It’s complete chaos. That’s the biggest reason they aren’t going to be available outside of single player. 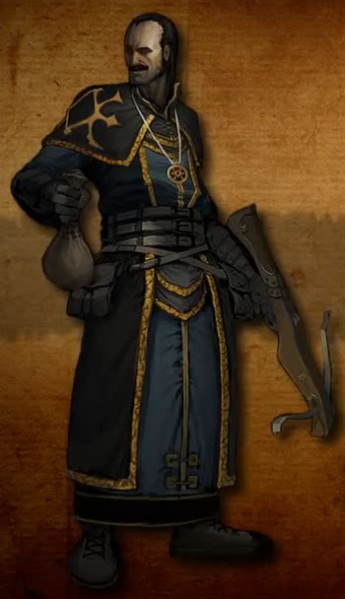 We also love that they’re these strong, vocal, named characters that have a place and point in the world. They have objectives, they have opinions, and when you’re by yourself it’s awesome. They’ll chime in and offer a comment on something, and it just does that much more to bring the world to life. But, in a co-op game, we all pick the Templar, and all of a sudden there’s this character in the world cloned four times, with the same voice, saying the same things… and it gets real weird real fast. Also they do tend to talk a bit, and having four followers all piping in at different times can be pretty annoying when you’re trying to talk with your friends.

There is actually the situation where you can have a follower and then re-run the quest where you pick them up, which could be a little weird, but we have some creative solutions we think keep that specific paradox from unraveling the spacetime continuum.

Followers have been a feature and we’ve known who these characters were going to be since before we announced the game, and while they haven’t been in active testing that entire time, we’re pretty well informed in how we feel they’ll play out best. Of course, iteration is the name of the game. I don’t really see the current plan changing, personally, but I’d be willing to be wrong. I just don’t see a potential for (clean) alternative options outweighing the pretty massive negatives that these rules correct.

Blizzard doesn’t care about feedback. Blizzard has always felt that whatever decision they make is the best decision and anyone who disagrees is wrong. It’s pointless to complain about this follower system because they won’t be changing it any time in the near future.

We take and implement tons of feedback. Good feedback that makes sense and makes for good changes to the game. Tons of people offer bad feedback with bad ideas or things that just won’t work outside of the narrow window they perceive a game through. There’s a difference.

OK, so “followers” are there to get casual players interested in co-op. Fine. But there are two things that happened here:
1. Mercenaries were removed
2. Followers were added to aid players in normal

If we were remaking Diablo II that would be a good point. But this is Diablo III. We can’t remove something that was never there.

I find the “we’re not remaking Diablo 2” argument tired and repetitious.

Me too, yet people still don’t seem to get it.

I don’t believe in the golden goose theory that some developer is suddenly blessed with the ability to design a perfect Diablo 3 game.

Us either, that’s why we have many designers, and strike teams, and internal tests, and feedback forms, and hundreds if not thousands of employees playing and offering feedback. You can claim that none of them could be “true” Diablo II fans, and I wouldn’t argue with you, because no matter how much of a veteran you are, it doesn’t make you a good designer.

I am not jaded, I do understand a certain amount of the game needs to be made for the public, but even though I accept people want to have no brainer fun, how certain can I be to expect a true challenge?

I appreciate that, and I don’t know. I can’t even begin to know how to answer a personal question like that for you. Maybe you’ll want to wait a few months after the game comes out to see how it pans out. I don’t know. Should I devise like a letter scale for how I expect your expectations to be met? It’ll be a P. You can be certain to expect a P-level challenge.

If your goal is to be disappointed, then I’m sure you’ll achieve it.

We’re recording a Diablo Podcast this weekend about

Followers, and from what the guests have said in email, I think we’ll have a lively debate about the wisdom of Blizzard’s implementation of the feature. That episode will be up Monday morning, at which time we’ll also have a new vote on Followers so you guys can all voice your opinion in a semi-democratic fashion.

I’m always curious to see the community consensus from our votes, but this one should be more interesting than most since the feedback and debate on Followers has been intense and varied. As a recent vote about Mercs showed, a fair number of fans didn’t want them in D3 at all. The majority though, did want mercs back, and wanted them as strong or stronger than the D2 mercs.

And Blizzard has delivered… semi-mercs who look awesome and have personalities and matter in the plot and are customizable with interesting equipment options… but who are designed to be utterly irrelevant to the end game, and only fun and useful in Normal Difficulty, which is designed to be so easy that you won’t need a merc to beat it anyway. I don’t think that every game feature has to be

end game viable, and I’m fine with the D3 Team including some features that get their main utility from Clvls 1-30, but I do not think Mercs were the best fit for that plan.

It’s entirely possible that Blizzard, in their wisdom, has crafted a Solomon-style solution that satisfies no one. A third of you guys may hate Followers since you didn’t want mercs at all, while the other two-thirds of you will hate Followers for being just what you wanted, if they weren’t gimped to Normal difficulty. We’ll find out on Monday, at least.