We’ve got another great writeup about a class in the PvP demo from Blizzcon, today.This one is by Adivirgi, who previously contributed his thoughts about the Witch Doctor. This report covers all of the skill/rune combos, basic strategy, Spirit management, and more. It’s quite informative, and here’s the start; click through for the whole thing.

Deadly Reach: Runed with Indigo to increase damage and Area of Effect of strikes 2 and 3. 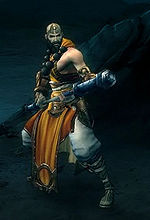 Based on what I have seen in the beta videos, I have always liked this ability (mostly because of its sound effect), but after using it in the arena I found it a little frustrating at times. What annoyed me was that if I clicked a target, my character wouldn’t necessarily run to the target, but instead I found him sometimes punching the air as if it were a ranged attack (technically it is, except that the range is really short). Other times it seemed like the enemy was just outside my range, as if I wasn’t hitting them at all, but it’s possible that the damage was being done just outside the graphic effect, which has been the case for a few other abilities.

The interesting thing about the rune effect is that the 3rd strike splintered out like a trident. In theory it sounds really useful because you could essentially hit multiple enemies with one strike, but the combat is so fast and chaotic that there weren’t too many opportunities to position yourself in such a way that you could benefit fully from this rune effect.

I would have preferred another rune, or another skill for that matter.

Dash: Runed with Indigo to increase movement speed for a few seconds.

This is definitely my favorite monk skill in the demo, and the rune effect was really fun too. I think I would have preferred to rune it with Alabaster for that 50% chance to stun (

crowd control effects are massive in PVP), but the increase in speed made this really good for chasing down and harassing enemies who were trying to escape (especially since the dash roots the target for 1 second).

I found that the distance the Monk would dash was much greater if you were dashing at a target compared to dashing with no target (to distance yourself from an enemy while fleeing). Also the speed bonus from the rune doesn’t actually activate unless you hit an enemy with the dash. So you could dash at the air away from your enemy to try and escape from them, but the rune effect wouldn’t become active and you would not receive a bonus to your run speed. Where this ability was really fun was to dash into the middle of a crowd, pop Seven Sided Strike or Lashing Tail Kick to soften and stun the melee fighters, and then dash back out towards a ranged enemy to take them down.

Spirit so it didn’t drain your resource faster than you could replenish it unless you were really overusing the ability. 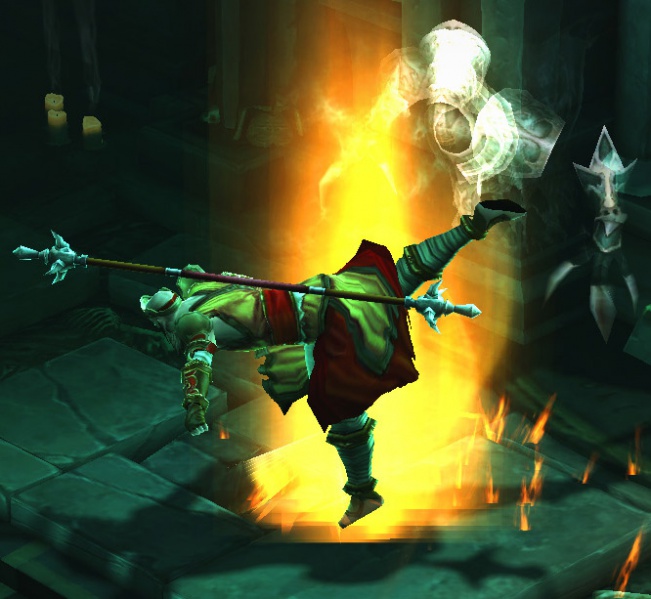 Here’s another amazing PVP ability that will save your ass and make you a hero at the same time. When used offensively, dashing into a crowd of enemies and stunning all of them gives your team a major advantage in a fight. I found this ability extremely useful when engaged in a face-to-face fight with another Monk, or worse, a Barbarian.

As over powered as this ability might seem, I still don’t think it’s enough to win a battle outright. It’s cool down is only 3 seconds which is not that long, but in a melee battle you may be able to get only 1, maybe 2 of these off before one of you dies. It’s nice to have, but having Seven Sided Strike off

cooldown, combined with this ability is really a guaranteed win, because by the time your character is finished using Seven Sided Strike, Lashing Tail Kick is just coming off cooldown again and your enemy has a considerable amount of damage done to him.

This one was immensely useful and I really can’t see any PVP Monk build not taking this skill and rune combination.

Serenity: Runed with Crimson to heal yourself considerably

I have mixed feeling about this skill. It’s obviously amazing to heal yourself in combat, but the 35 Spirit cost is tough to pull off especially after using seven sided strike, as well as all the dashes and lashing tail kicks you’ve been releasing on your enemies. If you have enough spirit, your option is that you can heal and bubble yourself for a few seconds and pretty much reduce your spirit to nothing, making you a pretty basic and non-versatile fighter, or you can try and pick off a ranged enemy on the outskirts of the battle by dashing out of the fight towards them and removing yourself from all the incoming melee damage.

It’s a tough decision, and the 60 second cooldown is so long that you’ll want to use this ability at the moments when you don’t have it available, then possibly forget about it when it is ready for use. When it’s off cooldown this skill is really just a panic button.

Looking back, I think the best time to use it was during a one-on-one battle, because it will greatly turn the tide of the fight and if you use it when you are being ganged on in a group fight, you’ll probably just die a few seconds after healing up anyways, and the 60 second cool down will be wasted. Timing and patience will make or break this skill. 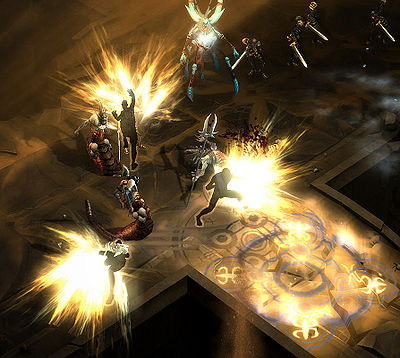 God I love this skill. Not only is it cool looking but if you have this off cool down there’s a pretty good chance you are not going to lose in a one-on-one battle. In group fights, it’s enough to soften everyone up for you and your teammates to either cause a bit of panic, or just outright take them down. The only down side is that it has a cooldown of 30 seconds and there will be a ton of fighting that goes on within that time period ( there is a passive that can remove this at the expense of costing more spirit).

I know I will definitely be taking this ability in PvP, but here’s what I found about the skill that has me thinking about changing the rune effect. This ability will strike enemies (or one single enemy) that are close to you, and it seemed to me that the range wasn’t very far, maybe 20 yards from where you’re standing. (Keep in mind that

yards are quite a bit smaller in Diablo III than in the real world.)

I noticed that sometimes I wouldn’t get all seven strikes off because my enemy would run away just out of range, or when I didn’t positioning myself close enough to the target when I popped the ability. Also the small AOE explosions are only useful if there are a ton of people around, and even then I think you could get more damage with a different rune.

I would have preferred the crimson rune which not only increases the base damage of each attack considerably, but it also teleports you to the target location and then releases the seven strikes. This way I would guarantee a landing of all seven hits and the increased damage is always guaranteed to land compared to the situational AOE explosions.

The last thing I want to say about this ability is that when you are performing it, you are immune to damage for the few seconds that it takes to perform the strikes. This is absolutely incredible in PVP (or PVE for that matter). Not only are you unleashing over 1000% weapon damage in just a few seconds, but you are also immune to taking damage as well.

Mantra of Conviction: Runed with Obsidian to slow surrounding enemies by 45%.

Not much of an active skill except for the extra buff for 3 seconds after using the ability (which should probably be longer or a triple the power, or both). You definitely want to have this ability up at all times. Sometimes for the sake of not forgetting to use it in all the chaos of PvP, I would just pop this skill the second after I came back to life. Not sure what Blizzard will do to make this feel like more of an active skill but at the moment it wasn’t something I was actively trying to use in the middle of a battle.

There were a ton of other amazing rune effects, such as a chance of being healed on hit or just outright increasing the amount of damage you do to enemies. The slowing effect granted by the obsidian rune was really cool, though. I always felt like I was much faster than any of my enemies, and that’s because I was. Enemies that were trying to escape me were pretty much toast. Add the fact that I could dash towards them, plus the added speed bonus from the Dash rune effect, plus the reduced speed from this skill, I was a total speed demon compared to the other classes. I could outrun and out chase anyone in the Arena, and the fact that I felt faster really made the whole flavor of the monk stand out.

There are numerous other options from Mantras and rune effects, but even though I doubt I would have picked this rune combination on my own, I really enjoyed it.

Transcendence (heal yourself for every point of spirit) was immensely useful in PVP.

Sixth Sense (Dodge chance increased by half of critical strike chance) was amazing if you speced and geared properly for it.

Chant of Resonance (double mantra and replenish 1 Spirit per second). The increased mantra duration is useless in PVP because you won’t even live that long, the 1 spirit per second really helped though.

A lot of people have asked how the Spirit resource played out in the Arena.

I feel like the longer I kept myself alive in battle, the more I wanted to die. I know that sounds strange, but here’s why. When you die and respawn, your spirit is replenished to full again. So if I ran out of Spirit and I couldn’t regain it quick enough by spamming Long Reach (which you wouldn’t want to do simply because monks are so dependent on their other spirit spending abilities in combat), I had to weigh the pros of staying alive and preventing that 1 extra kill from my enemies team death count, or accept death, get full spirit back instantly on return, and jump into the fight and kill 3-4 times more people than I could have if I stayed alive fighting without any spirit. See the dilemma? I still think it’s better to just die and come back with full spirit, so that’s something Blizzard might need to think about.

Overall, the Monk is a quick and fragile melee fighter. Being within melee range means there’s a chance you will die very quickly if you aren’t swift and careful. The monk has a very different feel and pace than the other characters; their play style requires you to be much quicker and reactive, which suits their role and style. Overall I think I liked the Monk just a little bit more than the Witch Doctor and the Wizard.