When we got news of Diablo III’s Real Money

Auction House and Always-Online requirements, I fired a list of questions over to Diablo creator

Max Schaefer. I was curious about his thoughts on the new systems, and what his new company, Runic Games, was planning for Torchlight 2 in those areas. Max took the time to reply to all of my questions and the full exchange has now been posted on our parent site, IncGamers.com.

See the full interview there, with Max’s thoughts on D3’s RMAH, online-only requirement, Torchlight 2’s approach to those issues, and more. Below are some excerpts from the interview.

Diablo.IncGamers.com: What do you think of the Diablo 3 auction house and the Real Money Trading aspect of it?
Max Schaefer: It’s something we thought about back in the old Diablo days as a way for people to have a more-secure transaction for all the items they were selling on EBAY. I’m not sure how I feel about it today – there are pluses and minuses. I’m glad they are doing it, though, because it serves as another point of distinction between Diablo III and Torchlight II.

Diablo.IncGamers.com: How about in the early days of your Diablo 3 MMORPG plans?
Max Schaefer: Yes, but not firm plans.

Diablo.IncGamers.com: Did you consider any RMT aspects to Torchlight 2 trading or other features?
Max Schaefer: No. Instead we chose to give our players the most flexibility possible. Online, offline, LAN play, and development tools. We will stay a one-time low cost purchase. I think both approaches are legitimate, though, this is just the path we’re taking for Torchlight II.

Diablo.IncGamers.com: Is it acceptable/ethical for a developer to require online full time for a non-MMORPG? 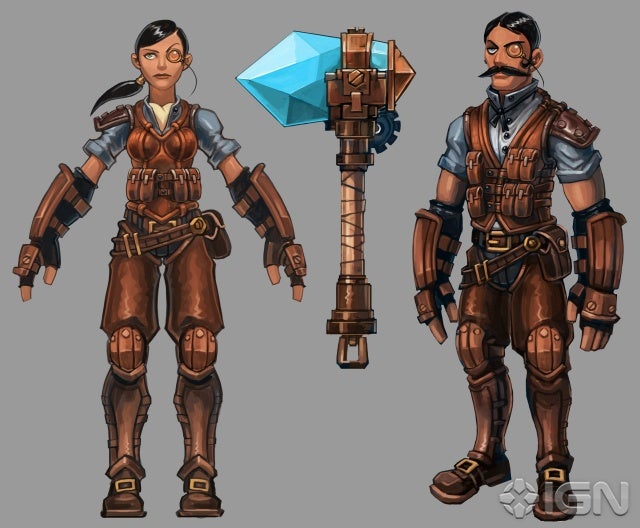 Max Schaefer: Yes, provided it fits the requirements of what they want to do with the game. In this case, a fully secure economy MAY require it. Since we are not going down that road ourselves, I’m very hesitant to second-guess their approach. As a gamer, I’d be annoyed if I thought this were just a Kotick-inspired plan to soak the consumer, but knowing Blizzard and the guys over there, that’s NOT what’s happening here. I’m certain it’s to create a fair competitive environment for their players. If you are an offline or single-player type, that’s not going to appeal to you, but if you like to partake in the ladders, or sell your fancy loot, or play with the absolute knowledge that nobody has an unfair advantage, it makes sense.

By the way, I think that there really is no meaningful distinction between Diablo 3 (or Diablo 2) and an MMORPG. By my reckoning, it is one, but that’s been my position for a long, long time.

Diablo.IncGamers.com: Do you think an RPG like Torchlight or Diablo 3 and its community, benefits from player input, modding access, etc?
We think so for Torchlight, but we’re not trying to create that cheat-free environment, so we don’t suffer from the downsides of allowing modding. Like I said before, I understand why they are precluding mods in Diablo 3, and like any design decision of this magnitude, there are advantages and disadvantages to any approach.

Thanks to Sir Schaefer for his replies, and I can’t help but wonder what their original plans for D3 as an MMORPG might have yielded on this front, had most of the dev team not quit in 2003, before the studio was shut down and the whole project was rebooted in 2005.

Enabling official support of RMT trading in the D3 MMORPG in 2007ish would have been hugely-controversial, much more so than Blizzard doing it in D3 in 2011 or 2012. But that doesn’t mean it wouldn’t have happened; Max and his fellow devs at Blizzard North were never afraid to ruffle feathers or lead the market, instead of just following trends once they become more or less safely accepted. At the very least, it would have been entertaining to watch Max personally dive into the RMT debate, hammering home the argument as he did in the old days over D2’s PvP switch. (Which remained in the game largely due to Max’s support of it.)

Mike Morhaime Being Given Honor Award at Gamelab Barcelona

Diablo 2 Producer says “Blizzard does not understand gamers any more”