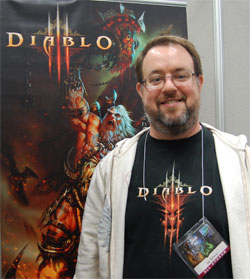 Wired has posted a nice long interview with D3 Lead Designer Jay Wilson, from Blizzcon. The focus of this one is unusual, since it’s primarily about the violence and blood and age appropriateness of D3, largely related to why Jay feels it’s okay for his 9 year old daughter to play the game. Happily, for those of you less interested in the parental guidance aspect of things, there’s also a fair amount of good D3 stuff as well.  A quote:

Wired.com: At the convention, we saw the Fallen Lunatic, who explodes after stabbing itself in the chest multiple times. Can anything ever too be too gory for Diablo?

Wilson: Yes. We do get a couple of things that are questionable, but usually, it?s not so much gore-related ? it?s that you can have gore that implies things that we as a Western society aren?t really comfortable with. Any kind of nudity, you can?t really have, especially when you couple it with violence. Those types of things don?t work well. You have to be really careful with things like torture. Those things are difficult. But to honest, in the development of the game, we tend not to think about it. We tend to build what we need to build and then wait for somebody to say, ?That?s a step too far.? There are a few ways we edit ourselves, but usually not with gore, like sheer amounts of gore. It?s like, ?You want to behead the guy? Go ahead, yes. You want to slice the guy apart? Go ahead.?

One example of one of the biggest ways we edited ourselves is ? we have this cool system where we can hit a dude so hard that his skeleton flies out. It was awesome, really cool-looking. And we added several skills that did that; every time you hit somebody, their skeletons fly out. But I have to say, it got a little boring after a while! It became a little excessive. It took away the coolness of it. And so there, we felt like our overuse of it actually de-emphasized it, and we didn?t like that. We were like, ?No, if we want to push the skeleton out of somebody, we want it to be a big deal.? I want to really like see it, and I want it to be a special event. And that?s probably the main way we?ve toned ourselves down, is to go back and say, let?s not go so overboard, that there?s nothing cool about the violence.

I saw some de-skeleton’ing hits in the demo, principly while playing the Barbarian, and I must admit that the sight of the fully-articulated skeleton of a Fallen Shaman, sent sliding a good 10 meters along the ground, leaving a wide smear of blood the whole way, was just awesome, and kept me using Bash far more than I would have for strictly strategic reasons.