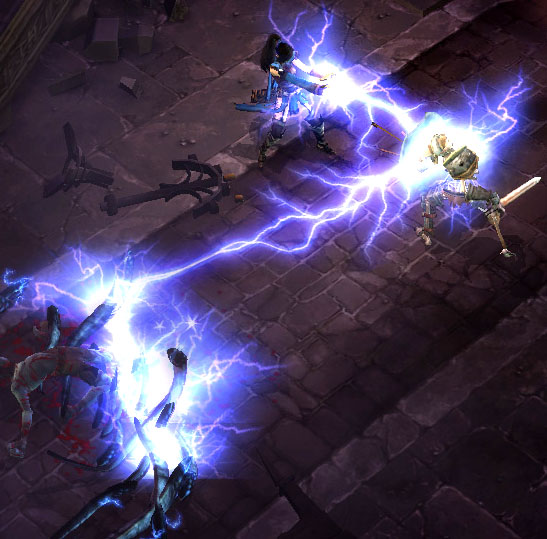 Jay Wilson. This one presents the “Lightning Round” questions (a few of which were presented in previous installments), plus one question about game controls that I’ve been saving for last, since I’m going to rant about/after it. The full interview transcript will be posted on Friday, with every question in the order in which it was asked.  Check out parts One, Two, Three, Four, and Five if you missed any of them, and join in the always-juicy post-interview comment conversation.

Thanks to Bashiok, Ryan, and everyone else from Blizzard PR who helped make this interview a reality, thanks to Jay for giving such good replies to our questions, and thanks to all of you guys for submitting excellent questions and joining in quality discussions of the interview presentation. Knowing there are so many fans eager for more info and ready to soak it in is what keeps us working hard to post the best Diablo 3 content anywhere.

Diii.net: These are the lightning round questions. These are a bunch of quick topics that you’ll probably say no comment on. If you can’t give any new information on them just say pass and I’ll go on to the next one.
Jay Wilson: Okay.

Diii.net: PvP?
Jay Wilson: Uh… we will have PvP in some form. And we’re working on it now, and it’s pretty awesome, and it’ll get announced at a future date.

Diii.net: Are we going to see any large info releases before next year’s blizzcon?
Jay Wilson: *pause* I dunno. That’s a question for Ryan. (The PR guy.)

Diii.net: Respecs. Cost, gold mechanism, any specifics?
Jay Wilson: We will have respecs. We haven’t determined the mechanism yet, but we’re definitely trying to do something different than a wholesale pay a token price and get all your skills back. We want to have a higher price than that.

Diii.net: What percent are you complete with the entire project, or any of the individual acts.
Jay Wilson: Now that’s a sneaky way to try to figure out what our release date is!

Diii.net: Do you plan on allowing voice support in game?
Jay Wilson:Uh, probably. Well yeah, I think that’s one of the core features

Diii.net: Are there going to be different character titles for completing difficulty levels or quests or other such things.
Jay Wilson: Wow, that’s a cool idea. *sincerely* Uh… I don’t know?

Diii.net: People are wondering about the single player save state. If it’s going to save the entire world as is, like Diablo 1 did, or if it’ll just save your progress and reset everything else, like Diablo 2 did?
Jay Wilson: *pause*  Uh… no comment.

Diii.net: Weapon switch hotkey?
Jay Wilson: No. We took that out.

Diii.net: Oh, I loved that feature in D2.
Jay Wilson: Mostly we took it out because the only examples we could come up with of how people used it were somewhat exploitive. Most frequently people used it by accident and wondered where the freak my weapons went. So it didn’t seem a useful feature for anyone but a very small portion of the audience that used it to swap items for magic find purposes, which seemed not a great super fun reason to swap weapons. There were probably some other uses, which I’m sure I’ll be reminded of in the forums.

Diii.net: There were a lot of specialized builds that found it essential to use two sets of weapons. Hybrid Amazons, chiefly. Used a bow and also a javelin/shield.
Jay Wilson: Yeah.

Rant time: Okay, so no weapon switch hotkey. About that, I’m unhappy. In a back broken by one too many straws sort of way.

I have so far approved, or at least tolerated, all of the unnecessary and largely deleterious, training wheels-style changes to the controls and belt interface in Diablo 3. Thus far Blizzard has told us that the D2 hotkeys were bad because players couldn’t see where they had all of their hotkeys mapped. And they’ve committed to making D3’s controls much simpler and more visual, and are in fact designing the game so we won’t *need* to quickly access more than 5 or 6 skills. (Which we’d better hope they succeed at, or it’s really going to suck having to learn to open the skill tree and drag out a skill you need to cast in the next 3 seconds to avoid death.)

And now we’re told that we can’t have a weapon switch hotkey, a feature that vies with running for the single best improvement made from D1 to D2. Why? Because some players used it intelligently and cleverly, to improve the performance of their characters. A few uses: +magic find for boss kills, +skills for casting warcries and summonings, alternating ranged and melee weapons, alternating 2H with 1H/shield for dangerous situations, to cast oskills found only on special weapons, to hold a weapon your character couldn’t use yet, or simply for extra item space. You know, making use of the game controls in an intelligent, skillful manner. It’s almost as if the game provided tools to reward skillful play. Yeah, I know. That’s so last decade.

So now there’s no weapon switch hotkey, because some players couldn’t figure out how to operate the controls. (Did anyone actually play D2 for more than a day without figuring out the weapon switch hotkey?) You know Jay, casting spells quickly and accurately can be kind of tricky too. Perhaps you should just slow down all of the monsters, and put a 2 second cool down on every spell, so that players with slow reflexes aren’t disadvantaged. And while we’re at it, do we really need and left and a right mouse button? Look how well Apple’s doing these days with just one? And with that we’ll remove the left and right weapon spaces. Using a sword AND a shield is so complicated. It’s like, double the stats. Just one weapon should be enough for D3 players. There will need to be some armor simplifications as well, of course, but they’ll wait til next year’s BlizzCon for that announcement?

You’ll note that these brilliant control *simplifications* are coming from a company whose MMORPG is the most popular game ever despite shipping with a control system that’s universally considered unusable. There’s a reason every knowledgeable WoW player makes use of numerous 3rd party UI mods to overcome the utterly inadequate level of control the actual game provides. And from that proud tradition springs no more weapon switch hotkey in D3! Let us rejoice.

Opinions expressed in post-interview rants are those of their authors, and do not necessarily reflect the editorial positions of Diii.net on a whole.