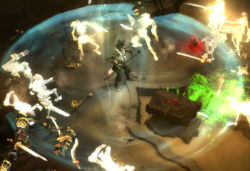 This is the fifth (of six) part of our exclusive Jay Wilson interview. In today’s section Jay covers skill design concepts and character build variety, as well as touching on returning D1/D2 monsters, and letting us know how we’ll be quickly and easily making town selling trips, without Town Portal scrolls to help.

Check out parts One, Two, Three, and Four if you missed any of them, and join in the always-juicy post-interview comment conversation. Tomorrow’s installment will close things out with a bunch of miscellaneous questions, and I’ll post the full transcript on Friday,

Witch Doctor build seems fairly narrow in concept. He’ll always have mongrels for tanking, some mini-mage support, and some minion attacks and a bit of mind control. Looking at his skill tree now, there doesn’t seem to be that many potential Witch Doctor builds, which isn’t true of the

Barbarian. Can you comment on that? Is it just that we don’t know enough about the Witch Doctor yet?

Jay Wilson: The Witch Doctor is less developed than the Wizard and the Barbarian. His skills are on what we call a second round, a second revision, while the Barbarian and Wizard are firmly in their third, maybe even their fourth revision. So as every time we revisit the systems we expand the abilities. It’s based on playing them. We discover basically the same things, and we’ll say something like, “Oh, this class seems a little bit more focused than we wanted. We can’t make this kind of build the way we wanted to.”  So we end up expanding them over time.

In the game, every class is different. Some classes offer themselves up to a lot of variations. Some classes tend to have a lot more focus. We saw that in Diablo II, some classes had fewer variations and fewer possibilities than the others. That’s not really our goal though. Our goal is to make sure that every class is equally diverse in the types of builds they can be made for.

Diii.net: That’s what players hope for long term, but as you said earlier, it’s amazing the variety of things players find to use once they have the game in their hands. Look at all the weird builds in Diablo II.

Jay Wilson: The hardest thing as designers is relinquishing control. That’s hard to do as a designer. We have to accept that. We have to sometimes say, “Here’s a cool skill, we’re not really sure what to do with it.” Unless it’s just crap. Q&A can go, “This is just crap.” And we’ll fix it. And make it better. But it’s really difficult sometimes to do that and really truly turning your game over to the community is hard. You have to stop thinking, “This is the kind of wizard I’d like to build.” so you aren’t keeping the game one way so you can build that. You have to allow for other things. That’s the biggest challenge, and it’s something we work on and iterate on constantly.

Diii.net: Do you guys work and plan in advance to plan multiple potential builds for each character? Or do you just throw in as many cool skills as you can and see how players find ways to use them?

Jay Wilson: A little bit of both. We try to anticipate what we think will be good builds. For example, there’s lots of things we put into the wizard, to try to make a battle mage more viable. But sometimes we put in skills that we’re not 100% sure is an awesome skill, but that we think somebody will find an awesome use for. We try to plan things ahead of time, but we’re not foolish enough to believe that the three of us who work on skills can come up with as many possibilities and variations as the millions of players who will take the work we’ve done and have fun building stuff with it. We mostly try to make sure they have the tools to have a lot of freedom and create a lot of cool stuff.

Diii.net: Can you place your heads into the lion’s jaws and name the 3 of you who work on skills?

Chris Haga does a lto of skill work as well.

Diii.net: Hah. I talked to Julian and Chris at Blizzcon. In fact, I sat beside Chris at the fansite convention lunch and he said he first decided he wanted to work at Blizzard when he was reading our D2 website back in high school. And he was amazed to meet me since he used to read stuff I wrote on the website like 8 years ago. He was like, “Oh wow, you’re Flux?”

Jay Wilson: That’s where we all started.

Diii.net: Are we going to see any more monster types from Diablo I that weren’t in Diablo II? Such as Hidden, Knights, Horned Chargers, etc?

Jay Wilson: Um… I would have to review our monster list to know precisely if they’re in Diablo I and not Diablo II. There are a few more returning from Diablo 2, but I don’t think there are others from Diablo 1 that weren’t in D2 as well?

Diii.net: How will we sell items easily in town, since there are no more town portals? How do you pop back quickly and easily without slowing down the gameplay?

Diii.net: It’s going to be Diablo 2 in style? There won’t be pets you can send back, or NPC merchants out in the wild, or any other odd features?