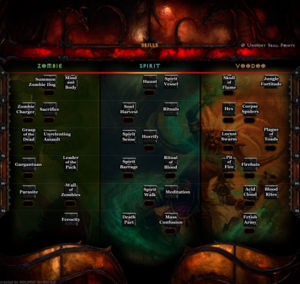 Today’s (Parts One, Two, and Three) fourth installment of questions (and answers) from our exclusive interview with Jay Wilson covers skills and stats. I was surprised to hear that the versions of the Barbarian’s and Wizard’s skill trees we saw at BlizzCon were nearing their projected final game form. I was anticipating numerous additional skills being added, with much higher Clvl requirements to begin using them, so Jay’s reply to that question shut me right down. I was happier with his replies about the Talisman, or at least the purpose of the still top secret, stat-boosting mini-game aspect of Diablo 3. I underlined the key words in the final sentence of Jay’s reply, since I think that’s a very worthy topic for further conversation.

Here’s today’s portion of the interview. Tomorrow will wrap up the skills discussion with some interesting info about skill development and planning for character build variety, and then Wednesday will bring the rest of the miscellaneous questions and answers. Enjoy.

Diii.net: We saw 30-35 skills for the Wizard (30), Barbarian (35), and Witch Doctor (34), at Blizzcon. Can you give us an idea how close to the final skill trees those are? Almost ready, or they’re still very preliminary and we’re still going to see lots more higher level skills?

Jay Wilson: In terms of the number of skills, that’s about right. In terms of the skill tree we’re um… we’re still playing around with the actual layouts of skill trees and the working of the skill system. The skills for the Wizard and Barbarian their skill trees were very solid.  We like their skills, though there are a few still missing. Especially for the Wizard, there are skills we didn’t put into her tree that we’re still defining, especially at the high end. The same for the Barbarian; we’ve got a few skills on the way for him. But for the most part, the content of those trees is more or less correct.

Diii.net: Based on playing those two characters and examining their trees, the Wizard has tons and tons of active attack skills and very few passives, while the Barbarian has an awful lot of defensive passives. Early on he didn’t have very many active skills. So fans were thinking we’d still see a lot of changes, and especially that the Wizard would be getting some more interesting passives.

Jay Wilson: *sounding thoughtful* Um… yeah, the team has done more passes and passives on the Barbarian, so his are more developed. The Wizard is a little bit harder to do passives for. If you look at the Barbarian in D2, you see the same thing. A lot more passives and less actives than the wizard in D2. I think that’s more a difference between a melee char and a magic wielder.

The fact that the Barbarian has a lot of passive defense is because he’s supposed to be tough. While I think that the Wizard probably doesn’t have enough passives, I would agree with that statement, keep in mind that they are two different classes.

Diii.net: Another follow up on that issue. People are wondering if the skills will be like Diablo 2 or more like World of Warcraft. Will we see more skills forever, or get the top level at level 30ish?

Jay Wilson: Diablo 2. We’re following the same model. Here essentially our Nightmare and Hell difficulties are an extension of normal difficulty, not a continuation of more content. So normal difficulty ends our core game, and then nightmare and hell are replays of them on higher skills levels. So we are going to allow you to continue and develop your skills into the higher difficulty levels.

Talisman. You said initially it was some sort of stat-boosting thing, but it’s been disabled for the past year and a half, in playable builds anyway.

Diii.net: People are wondering if there’s going to be some mechanism to allow greater character diversification in stats, given that we can not manually assign our own attribute points in Diablo 3. There will be something more than just finding +10 on an item. We’ll be able to do something more to differentiate our characters from others?

Jay Wilson: Yes. We’re stated in the past that we’re working on a new customization system. A system that’s part of your character building. Also that within the item space we’re looking for ways for more… we really prefer the single point stat customization be more item based. But we’re going to have a system to more or less replace the attribute point spending system.