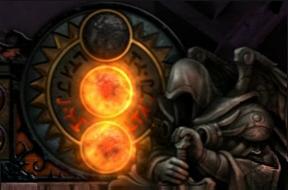 Jay Wilson went off smoothly (thanks to all who submitted questions), and despite scheduling issues resulting in our interview lasting a bit less than the anticipated 30 minutes, we were able to get off a lot of questions. Fifty-six, by my count, and having just finished transcribing them all, I should know. We’re not going to be posting them all at once just yet, and will instead put up a thematically-related chunk each day, before posting the full transcript next week. All the better for you guys to sink your teeth into the new info. And yes, there’s a lot of new info, and some very debate-worthy stuff. I’m personally itching to rip into Blizzard’s plans regarding one aspect of the game controls, but that will have to wait until another day.

For today, we’re starting off with some additional info on something we just found out about at BlizzCon, and that we’ve heard almost no details about yet. The non-mana resource system that the Wizard and Monk will be using. If you missed the Blizzcon headlines, let me explain. Only the Witch Doctor will have “mana,” in Diablo 3. The

Fury, which is fairly well understood, but we don’t yet know anything about what the

Monk (or the secret 5th character) will use. Jay wasn’t about to spill all the beans, but he was quite forthcoming about how the various mana-like resource systems are designed to work, and what sort of play style they are meant to encourage. Here’s the quote; click through to see the equally-informative follow up.

Diii.net: Everyone seems pretty happy with the function and form of the Barbarian’s Fury resource, but nothing has been revealed about the non-mana resources that the Wizard and Monk will use. Can you give us some insight into what kind of play style their resources are meant to encourage?

Jay Wilson: Well for the Wizard we want to enforce the fact that she’s a glass cannon. I don’t think it’s fun to ever run out of mana. I’m not really interested in an extended resource for her. For the WD we’re okay with mana, since he’s got some pretty good skills to recover mana that also double as attacks. And he’s not defenseless when he’s out of mana. He’s got pets and ways to attack with them that aren’t mana intensive. For him that makes mana fairly interesting.

For the wizard, when she’s out of mana she just dies. And that’s not fun.  So if anything, we want to encourage how she plays. So she’s the kind of character that blasts first and asks questions later.  Very vulnerable. So we want to implement a system that makes her more blasty, but even more vulnerable. We want to make that a choice for the player. “Do I want to make myself more vulnerable in exchange for being more blasty.” And that’s a cool gameplay pull there.

For the Monk um… I’m not ready to talk about him yet since he’s just too early. We still haven’t decided exactly what we want to do with him. We’re still playing around with his resource system.

Diii.net: Do you envision the health globes will boost those other resources in the way that the Wizard and Witch Doctor were gaining mana from them at Blizzcon?

Jay Wilson:Um, maybe? *sounding intrigued* Usually in the third or fourth skill revision on classes we look at that kind of thing. For the Witch Doctor we figured that a lot of the mana things we had on the Wizard would work better on the Witch Doctor. We were having trouble maintaining enough mana while play testing the Witch Doctor. Especially if players didn’t take a specific mana recovery skill. So we focused on spreading that out across a lot more of the class so he can pull mana back more easily.  When we get to other classes I’m sure we’ll look for more of that.

But the key is that we don’t necessarily want to…. we don’t want to cannibalize an existing gameplay mechanic. So when you take health globes that are already important, and you make them even more important, then that doesn’t really create gameplay. For the WD, the health globes weren’t that important a lot of times, since he very rarely took damage with his pets, so for him by enhancing his desire for health globes, we’re really putting gameplay where it wasn’t. So whatever we’re designing a class that’s what we look at.