We posted a bunch of hands-on reports yesterday, but by far the best beta/demo discussion can be found on French site Judge Hype. Not ideal if you don’t real French, but Google translation does a tolerable job, and the info is so complete that it’s well worth tolerating the occasional maladroit computer translation.

The juiciest piece is the loooooong beta build write up, in which nearly every step of a Wizard’s journey through the small demo/beta is detailed. Character selection and creation screens, the game starting battle, NPC descriptions, early quests, the first sighting of

Deckard Cain, a kind-spoilery thing about finding some of

quests leading up to Here are just a couple of quotes, taken from the Google translation, that don’t even begin to scratch the surface of the huge report. Obviously, I recommend that you read the whole thing.

I enter the tavern called

The Slaughtered Calf Inn (no load times) and it found

Deckard Cain who is the daughter of Adria. While we chewed the fat, I noticed several villagers who seemed a bit disturbed. That’s when they went into a trance and turned into zombies, which began to attack.. Leah pulled out her bow and did not hesitate to give me a helping hand dealing with them. Once the fight is over, I take my discussion with Leah who invites me to take a look at her room. I come in, in all honor (wicked band ^ ^), and finds the Leah’s Journal, Part 1 Lost in a library. When you get this kind of object, you can get additional information on the history, which of course will please the fans of Diablo Lore.

…In small dungeons that I mentioned below, I noted that there is a nice little event. I am indeed fallen (without hurting me I assure you) on an object named “Jar of Souls.” Clicking the play began a quest asking me to survive for 60 seconds to attack monsters. Countless skeletons began to appear little by little and if you manage to survive, you will get some experience points bonus (in addition to the bonus XP that fall when you kill more monsters in a short time). If not, well too bad for you. Indeed, I think that dying in a case like this does not revive the event. But rest assured, there will be lots of little events like in Diablo III. I had also spoken in the BlizzCon 2009 when I tried the monk and I had to find the exit of a dungeon in three minutes … without success. ^ ^

Elsewhere in the twenty-page report JudgeHype gives general descriptions of all the classes, plus some interesting side info about dungeons and skills. This page ends with an intriguing quote, where someone from Blizzard is quoted as saying the beta will start, “very, very soon.” 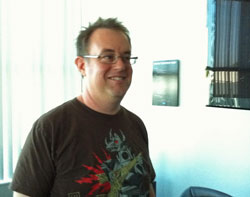 Another must-read page focuses on Interviews, where numerous bullet point facts are cited from

Leonard Boyarsky. Bonus fun with the developer photos on this page; it’s great to see a smiling, happy-looking Jay Wilson (for a change). The Leonard Boyarsky picture is also interesting, because the angle of the photo + Leonard’s weight-lifting habits make his forearms look literally twice the size of his head. Now that is a big elbow.

I’ve saved the best for last, though. (To vex the TLDR people who gave up already.) The Judge Hype guy deserves our thanks for spending most of his 4.5 hours with the demo not playing it, but taking a meticulous record all of the skills, traits, and even the game option menus. There aren’t many new/different skills from previous builds, but Traits (now boringly called passive skills) are much changed around. Each class still has a ton of them, but instead of a trait point every other or every third level, now you just get 3 in the entire game, which you use to enable one Trait at Clvl 10, 20, and 30. And that’s it. No more. Ever.

There are five pages listing all the skills and traits, and sure, the Google translation makes them decipherable. But wouldn’t you prefer a human’s efforts? I would, and happily, we’ve got one. Zediono has already translated all of the skill names, plus all of the traits and their functions, in a thread in our Diablo 3 community forum. Dig in and learn stuffs in the forum thread for now, though DiabloWiki.net updates with all this new info are already well-underway.

A few of the interesting new ones, in no particular order.

See the forum post for the full list. See a mirror for the despairing expression of a Diablo III aficionado who is not at all sure about the benefit of removing skill and trait points.