A fan posted a big list things he hoped to learn more about at this year’s Blizzcon. One of the items was

Mercenaries, and when another comment offered some Merc info that wasn’t quite right, Bashiok stepped in with a correction.

As of yet we have heard very little on the role of hirelings in Diablo 3 except that they are now called followers and that you can have more than one at a time.

What you’ve seen are the throw away helpers you can pick up on the field and they follow you, and are helpful, but usually die off pretty fast. They’re not intended as a replacement for the mercenary system of yore.

The NPCs Bashiok refers to are quite common in the game. A few of them were seen in the WWI 2008 gameplay, when the

Deckard Cain and three NPC archers in the dungeon. There were numerous such NPC encounters in the Blizzcon 2008 and 2009 demo build, and the NPCs behaved much as the ones in that introductory gameplay movie do. They speak to your character and ask for help, and you need to locate an item for them, or escort them to a location, or just keep them from dying in an imminent monster attack to complete the quest. See the

quests article in the wiki for more details.

A few of the quests that involve such NPC interactions include:

Also note that the D3 Team has repeatedly stated that they want to do mercs in D3, and want them to be much bigger and better than the were in D2. So don’t interpret Bashiok’s comment as meaning that all we’ll get are the random minor NPC quest encounters. 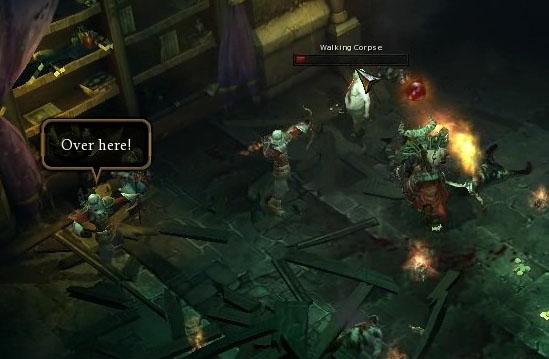