Cain smelled something foul like rotten meat. Another room loomed through an archway before him, pitch black inside. He heard movement and a low, guttural snarl accompanied by the scraping of rock. Feeling exposed in the candlelight, he flattened himself against the wall and moved as quietly as a ghost to a corner between two bookcases.

The thing that emerged from the archway was so huge and incomprehensible that at first Cain had trouble processing the sight of it. It appeared to be made of human limbs and torsos all rolled together, along with a forest of jutting spikes of what looked like rock and timber. Two long arms ended in clubs rather than hands and sprouted the same shards of wood and stone. At least three separate heads grew from putrid, swollen flesh, white-filmed eyes rolling blindly in their sockets.

The monstrosity moved slowly and laboriously, and it had to duck to clear the arch, over ten feet off the floor. Its dripping shoulders nearly touched both sides of the opening as it leaned into the library, grunting with the effort. It seemed to have one main head in the center of its chest, and as it swung in Cain’s direction, those eyes fixed on his face.

The second page will be after the break.

The creature paused as if studying him. Then it opened its primary mouth and roared, the stench of its breath washing over Cain as the mouths of the other heads screeched in unison.

The candle flickered and nearly went out. Fresh panic rose up in Cain as the creature took a lumbering step toward him and threatened to knock over the table and send them into darkness. He slipped away from his hiding place and went for the door, but the monster moved with him and reached out a long clubbed limb as if to smash him into the floor.

Seems pretty obvious the monster described is an 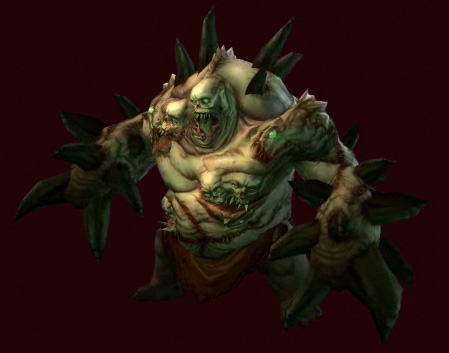 Diablo Animated Series for Netflix Appears to be Going Ahead