Here’s the fourth of my five jumbo-sized PvM class reports from Blizzcon. This one covers the Witch Doctor , leaving the Demon Hunter for last. This article examines why the D2 Necromancer never quite satisfied me, explains why the D3 Witch Doctor should, digresses about Harry Potter, details the Witch Doctor’s skills available in the demo, drools over the vast improvements offered them by skill runes, and speculates about various long term Witch Doctor issues and skill varieties. 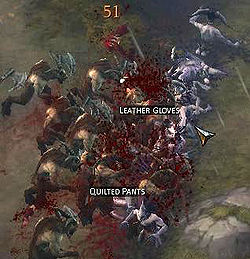 Here’s a short quote; click through for the whole thing:

The other interesting thing about this skill was the firing mechanism. You couldn’t click it. If you did nothing would happen. Literally; sometimes one bat would squeak out, but usually not even that. The spell dealt very good DoT, but you had to hold down the mouse button to let the bats flow forth. It took a second or two for the full flow to get going, and once it did the damage was great, but you had to commit to using it.

This made the skill not so good against single targets, since it was slow to start dealing damage, and when it did the damage was spread over a wide area. Sledgehammer for an ant.

It was awesome against big groups, though. Easily the most powerful skill I used in the entire demo, in terms of total damage dealt. Once I had it with the rune effect the demo became almost pointless, it was so easy. I’d just follow my Mongrels, get into position once they found some monsters, and start hosing out the bats. The shape of the flock is like a slice of pie (mmm, tasty bat pie!) and anything in that area takes heavy DoT.

My other Blizzcon 2010 Reports: