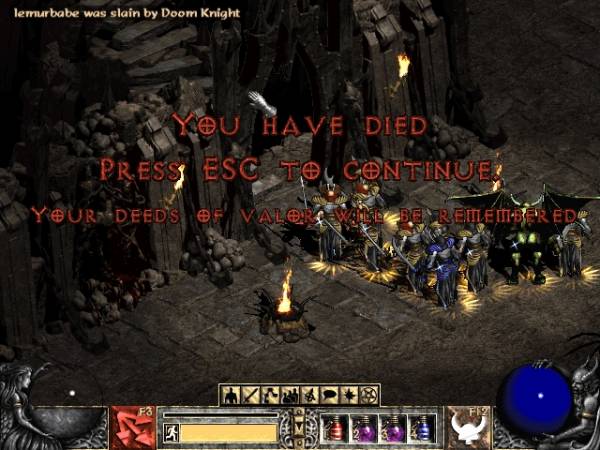 Though the forum post that spurred this article is fairly absurd (most of those replying though he was just trolling), the argument advanced in it got me to thinking.  Is there a downside to

I don’t mean a downside to playing Hardcore mode. I don’t think there is, but I’m biased; the vast majority of my D2 realm characters have been Hardcore and I’m planning to play HC in D3. But just for the sake of the argument… Perhaps HC is a bad influence on some gamers; making them too intense, or throwing them into a depression when lag kills their favorite character, etc. That’s not the thrust of this post, though. What I’m pondering is if the inclusion of Hardcore as a game feature has any downside?

I don’t think so, but that’s why there are comments.  Here’s a more developed argument, that you are also free to disagree with.

Hardcore mode lowers the overall quality of the Softcore playing experience. How? It’s essentially a “brain drain.” Hardcore players are more serious, mature, and conscientious. HC causes that by attracting such players in the first place, driving off those who can’t handle the high stakes of HC, and by causing players who do stick with HC to mature as they struggle to surmount tragedy. (It builds character! *cough*) Therefore, since HC mode has more such players, the overall quality of the Softcore play experience suffers, since those left behind are disproportionately idiots. Eliminating HC mode in D2 would put more intelligent, party-friendly, competent players back into the overall player population, where they would improve the overall play experience.

(Disclaimer #1: Obviously I’m not saying that all SC players are idiots, and that all HC players aren’t. But percentage-wise?)

The logic (if I can call it that) behind this argument is similar to the one often made about player killing in games. It’s often insisted (usually by PK advocates) that removing player killing lowers the overall game experience. Why? Because the various anti-social players who would have contented themselves with Pking will turn, in its absence, into outright griefers. Who can be far more destructive (to other players’ fun) by harassing, spamming, running trade scams, crashing servers, etc, than they ever could have been if they’d stuck to Pking within the framework of the game.

(Disclaimer #2: This isn’t to say that all PKs are griefers, or vice versa. But there’s obviously some fairly strong overlap.)

So… is there any similar downside to including Hardcore? Or switch it around. Would there be a downside to not including it? Lower sales, good players quitting since they weren’t challenged by Softcore, players getting bored more quickly and turning into griefers, etc.

The floor is open to debate.

Update: The comments thus far are basically HC vs. SC player debate, which is sort of beside the point. (Though perhaps inevitable, given the source material.) Still, after you throw your $.02 in on that, maybe give some thought to the larger issue? What does the game gain/lose by including HC?

One interesting point brought up in comments: does the fact that there is an HC mode cause game design/balance changes? For example, monsters can’t have one-hit kills, everything has to be balanced to be survivable if played competently, etc. Is this a good thing? Does having a HC option that plays exactly like SC perhaps limit the upper game difficulty? Or would (non-buggy) one hit kills and other supremely dangerous features be cheesy, even if there were no HC chars to truly sufffer from them?

This “guest article” was written by a site staff member, but we’re looking to incorporate more editorial, blog-style pieces into the site news. If you’re interested in regularly or occasionally submitting blogs to Diii.net, get in touch with Flux.