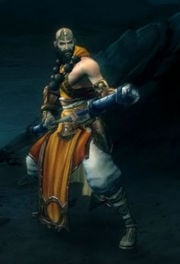 The Monk’s skills were an odd mixture at Blizzcon this year. There were only 8 of them, spread over 3 generically-named skill trees, but all of the skills in the game seemed very polished and worked nicely. I suspect that a lot of others are done but were held back to retain more surprises, and that lots of others must be in the “under construction” phase. There were no skills shown with icon and description, and a “disabled” tag, as was true for the other characters.

With only 8 skills, divided up 4, 2, and 2 by tree (The 3 trees which were memorably named “Skill Tree A,” Skill Tree B,” and “Skill Tree C.” Catchy! Descriptive!) there is no way to say how they will be grouped or what sort of trees the Monk will ultimately have. The 8 skills themselves were quite well defined and were all fully functional and polished, and I used them all during my hour+ playing the Monk. The demo character starts off at level 12, with points in 6 of the skills.  I leveled my Monk up to 15 by clearing out every bit of the large, multi-level demo, and adding earned points to enable Way of a Hundred Fists and Inner Sanctuary, so I could test those as well.

One interesting detail was that the skills on the fourth tier, shown between level 15 and 20, were usable as soon as I reached level 13 and had a point to place. Looking at the tree, I thought I’d be unable to use that skill until level 15, since they were listed horizontally, between the 15 and 20 on the left side of the skill tree window. (The same was true of the other characters; they could put points into Tier 4 skills at level 13, so it wasn’t just the Monk.) It’s not clear if this was a change made just for the demo build, or if it’s a change/difference in how skill requirements are processed in the game.

This tree had 4 of the 8 skills, with a level 5, 10, and two 15s. All the skills in the 1, 5, and 10 tiers had points invested in them already, so they could be used from the very start. There were only 2 level 15 Monk skills in the demo, the only two Monk skills without points already in them on the demo character, and both were in this tree. Both were fairly cool to use, too, though 100 Fists was the clear champ of the two.

Force Without Thought
Passive skill
Rank: 1/5.
Description: Counteract enemies without interrupting the normal flow of your attacks. When you dodge you automatically counter act the attacker for 10% of your normal weapon damage.

Rank: 2/5.
Description: Counteract enemies without interrupting the normal flow of your attacks. When you dodge you automatically counter act the attacker for 20% of your normal weapon damage.

Rank: 3/5.
Description: Counteract enemies without interrupting the normal flow of your attacks. When you dodge you automatically counter act the attacker for 30% of your normal weapon damage.

Rank: 4/5.
Description: Counteract enemies without interrupting the normal flow of your attacks. When you dodge you automatically counteract the attacker for 40% of your normal weapon damage.

Not much to say about this one, since it had a point in it and I never added any more to see if I could discern the improvement. The Monk hits so fast and was overpowered for the Blizzcon build that needing to dodge or getting your hits interrupted wasn’t a real major problem. 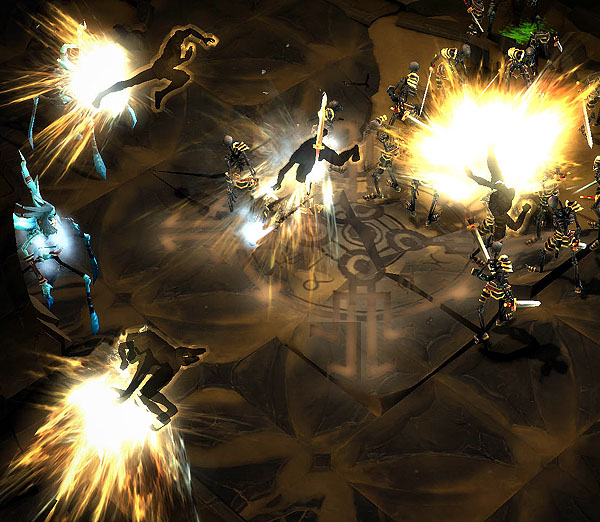 Rank: 2/5
Description: Dash at your enemies, striking 7 times in succession for 50% of your weapon damage.

A very fun skill. Much like a finishing move in a fighter. The Monk teleports to his target, Dragon Flight style, and commences to strike multiple times. As best I could tell, the Monk was invulnerable, or perhaps intangible, during this attack. He’s not visible except as flashing series of human shapes, all shining gold and two-dimensional. You can see a screenshot to the right, or see it featured in the Blizzcon B-roll gameplay footage. The evolution of the skill was described in detail during the Monk design panel as well.

The hits always seemed to land, and did considerable damage in total. If this one was cast on an empty space, the monk would do three flashing hits before stopping. He’d also stop short of 6 if the target died along the way.  If there were multiple targets in the area, he seemed to select targets randomly, hitting each of them some number of times out of his total of 6.

This one was best used on single or double targets, ideally a boss that needed finishing off, especially a teleporter or another elusive one, since all the hits would go to it in rapid succession, and hit it no matter how it squirmed.

Fun and effective. What more do you want?

Inner Sanctuary
Mana cost: 24
Rank: 1/5
Description: Creates a protected region on the ground for 6 seconds that can not be bypassed by enemies.

Rank: 2/5
Description: Creates a protected region on the ground for 7 seconds that can not be bypassed by enemies.

I tried this one just to be thorough, since there was no need for additional defense at any point during the Blizzcon demo. At least not for the (intentionally) overpowered Monk. When cast, this skill creates a large rune on the ground, with a Stop Time-like bubble shield in the middle of which stands the Monk. It appeared to be impermeable to melee attackers; the Fallen I used it against couldn’t penetrate, at lest. They could reach through it, though. A Fallen Overseer had enough range to whack me with his improvised pole arm, as I stood in the center, immediately after casting it.  Regular Fallen could not though, and just stood ringed around the exterior, waiting their turn.

I didn’t try it against bosses or flying enemies, and there were very few projectile enemies in the Blizzcon build to test that aspect of it against.  And it was never necessary, since I was always better off attacking than standing back on defense, with the Monk.

This one was a blast to use, and was about the most fun Monk skill. It’s just straight out of an action movie, or some game like Tekken 3. The Monk does a short dash to the first punch, throws a flurry of blows for the second stage, and then blasts an explosive, AoE attack.  It’s an excellent crowd killer, and when used on a monster marked with the Explosive Palm 3rd stage, it’s almost certain to clear the room. 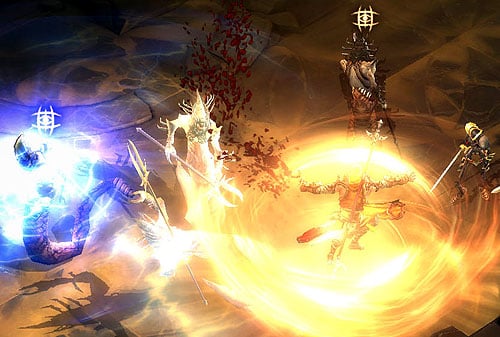 An interesting sort of combo attack, since it’s about defensive bonuses. The damage is lower than any other Monk attacks, lower even than just plain attack (which I never used once during my Blizzcon play time).  Like Inner Sanctuary, this one was never needed at Blizzcon. There’s no big end boss anywhere, and the only dangers came from large mobs. This skill could be useful against those, but they were generally easier to just destroy with many fast hits than to weaken first.

This one seems like it would be very useful against big bosses, since it makes them susceptible to damage, while making them deal less to you. Throwing in stage 2 or 3 of this in the midst of other more useful combo attacks could be helpful, now and then, since the curse-like debuff can hit multiple enemies in close proximity. 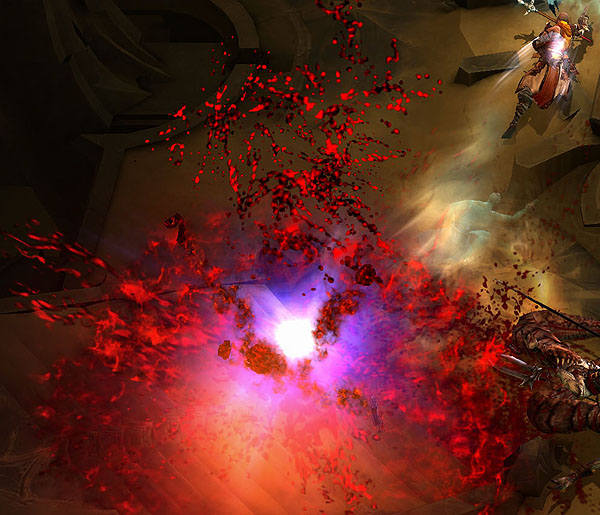 Rank: 2/5
First hit: 40% of weapon damage.
Second hit: 60% of weapon damage.
Third hit: Target bleeds for 70 damage over 7 seconds. Moving causes 200% more bleeding damage. If target dies it explodes dealing 60-100% of its maximum life in damage to all enemies nearby.

Rank: 3/5
First hit: 45% of weapon damage.
Second hit: 70% of weapon damage.
Third hit: Target bleeds for 80 damage over 7 seconds. Moving causes 200% more bleeding damage. If target dies it explodes dealing 60-100% of its maximum life in damage to all enemies nearby. 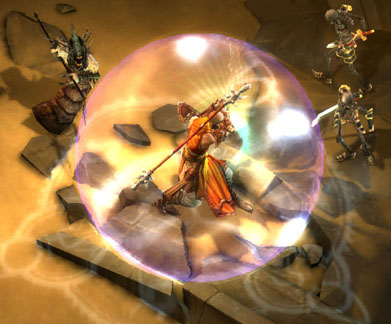 This one was not needed in the Blizzcon build, since the Monk was quite overpowered in combat. I didn’t experiment with his “dodge” ability, which is mentioned as a by product of several skills, since it was so much more fun just to blast everything with his offense. Plus, testing time is always limited, even in the press room. I would have made sure to try the other element of this skill, the “rebounds enemy ranged attacks,” but there were zero monster archers and virtually no projectile spell casters in the Blizzcon build.

Fallen Shaman were fairly common in the surface desert areas, but they seldom hurled Fireballs (they were quite quick to resurrect dead Imps,though). There were lots of Dark Cultists, but only the foot soldiers and the “transform into a demon” types. None of the spell casting mage types. And while there were some weird insect-like mages in the dungeons below the desert, they were infrequently encountered and were always behind a mob of melee enemies, so I never had time to stop beating down the foot soldiers just to try to reflect the (easily avoided) projectiles.

The spell does have a cool animation, at least. The Monk stands still and does a simple staff twirl, while a large rune appears below his feet.

Radiant Visage
Rank: 1/5
Description: A flash of light sears the eyes of all enemies within 20 feet, blinding them for 2-4 seconds. If attacked they will fight back with a 40% reduced chance to hit.
Mana cost: 15

Rank: 2/5
Description: A flash of light sears the eyes of all enemies within 20 feet, blinding them for 3-5 seconds. If attacked they will fight back with a 42% reduced chance to hit.
Mana cost: 15

Rank: 3/5
Description: A flash of light sears the eyes of all enemies within 20 feet, blinding them for 4-6 seconds. If attacked they will fight back with a 44% reduced chance to hit.
Mana cost: 15

A useful war cry-like attack, this one had a substantial radius, and blinded every non-boss in the area, stopping them in their tracks.  I used this against every charge of Fallen Imps (performed when a Fallen Overseer got a mob of 6-12 amped up all at once). No, it wasn’t really necessary, since a bunch of Imps were essentially walking health orbs/combo power-ups, but it was sometimes fun to pretend that strategy was required.