Diablo Drought? stretches on, here are some new forum threads to kill time on. Most of them come from the Diablo 3 General Discussion forum. 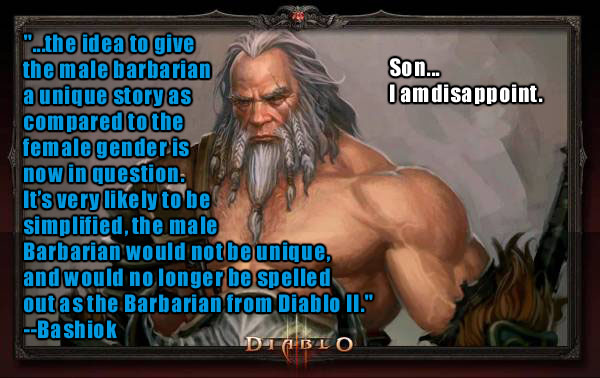 Last November, Bashiok announced that the game lore was probably going to be changed in regards to the male Barbarian. No longer was he going to be the same character from Diablo 2, twenty years later. Much fan outrage ensued, with many of us (myself included) throwing accusations of sloth at the D3 writers. Were they dumping one of the coolest character bio tidbits just because they didn’t want to write different dialogue for the male and female Barb? No additional explanation was offered then, and we’ve not heard any follow up since.

This weekend, when I was updating that episode to the Barbarian’s wiki page, I found myself thinking about it from another angle. What if the problem wasn’t the M/F barb, but the male Barb vs. all the other characters. He’d seen things twenty years ago, that none of the rest of the chars had, and that fact was (apparently) sticking like a fishbone in the throat of Diablo III’s plot/story. See the forum thread for my suggestions, which almost everyone (so far and to my susprise) has agreed with.

mwanafalsafa is worried about reading the news and forums during the beta, since he wants to avoid spoilers. He’s not alone; most of the respondents admit that they can’t stop reading, but say they’d like to avoid story spoilers. I agree, and we’ll post spoilery plot stuff and images with warnings, when the time comes. I still remember the angry complaints I got back in June 2000 when I posted some front page, non-pixeled thumbnails of Duriel.

Neltharion wants Diablo III to be an MMO, with vast Realm vs. Realm PvP. Humans vs. Angels vs. Demons? That’s obviously not going to happen with D3, but can you imagine that working as a game? Kind of a mega version of WoW crossed with Guild Wars?

Closing with a few topics that pop up time and again, as what we know about the game changes.