waypoint. It’s not, as another fan who played at Blizzcon explains. Bashiok then leaps in with some interesting additional information about dungeon entrances and pre-alpha bugs. 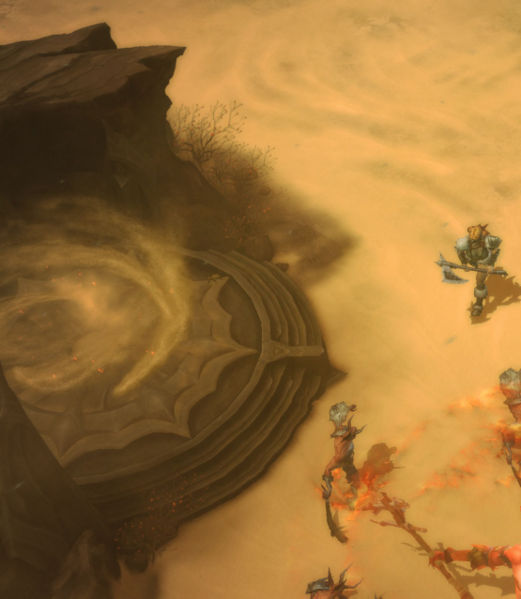 I played the 2009 demo. That is a dungeon entrance. Rather than having stairs to take you down there are those portals which warp you to the dungeon. It also means you have to find another portal to get out. Personally I hope that at least some of them have regular stairs, although probably not as Blizzard has stated that they don’t want to force players to backtrack after finishing a dungeon, and so they put exits at the end.

Bashiok: The portals to the dungeons were a bit wacky in the demo. Only the timed dungeons, as far as I remember, wouldn’t let you port back out from where you came in. And after you entered the portal base would actually shatter and the sand effects would stop and all sorts of neat stuff. That was the point of those dungeons though, find the exit in 3 minutes or you die. But I believe some of the non-timed dungeons were slightly buggy in that exiting from the entrance you came in from would sometimes put you at the other exit, and some fun stuff like that.

In general though for entrances/exits, yeah clearing a dungeon just to back track the whole thing is kinda lamesauce, so we probably won’t do that. Maybe in some specific cases where it makes sense.

That’s very interesting. Is there a way to distinguish between the timed “deathtrap” dungeons and the regular ones? I could see this being very discouraging to Hard Core players if there was no way to tell them apart.

Bashiok: There wasn’t in the demo. Actually that is weird… I hadn’t thought of that before… the name of the timed dungeon is La’awlharduhcore. Curious…

It was actually called

The Collapsing Tomb, and you can read more about it and the fifteen other quests thus far seen in the game, in the wiki. Joke dungeon names aside, Bashiok’s right in that there was no warning (other than the name) that it was a deathtrap of a timed dungeon before you entered it I certainly remembered that one the next time I played the demo. It was an optional quest, so a hardcore player could just skip it. Whether there will be other timed dungeons later in the game, some of which might be required to advance, is another question.