After a real life-induced delay, Chris Marks returns with a new edition of Diconstruction. In this installment he discusses the type of quests found in Diablo I and Diablo II, as well as touching on the “differences” between single player and online play, in his usual humorous style. Here’s a short quote; click through to read the full piece.

Over the last couple columns I’ve been vaguely touching on gameplay, the way a hammer vaguely touches a nail when it’s driving it in to a 3 inch plank of wood, so I think it’s about time to focus specifically on the online gameplay experience. It is extremely convenient, then, that Blizzard includes a little disclaimer in their game documentation that goes something like this:

“Online game experience may vary from single player, and you are significantly more likely than not to encounter throngs of people who are idiots in one way or another, up to and including thinking that Carlos Mencia qualifies as ‘funny’.”

What’s particularly interesting to me is that the way in which the gameplay differs is different from the first Diablo to the second. Where the original Diablo’s online gameplay was like giving your favourite supervillain the exact weapons he needs in order to destroy the world, Diablo 2’s online gameplay is like telling that same supervillain he doesn’t get any ice cream unless he can go find the weapons he needs and bring them back to you so he can show the to the class.

Before we can really evaluate the online gameplay experience, we first need to establish the ups and disastrous pitfalls of the single player game. Both Diablo and Diablo 2 suffer from a malady I like to call “being a Diablo game.” By that I mean both games have a large wealth of fun and interesting ways to kill people, and fun and interesting weapons with which to do it, but because you can only play one character at a time and are unable to transfer items between characters without a third party program it doesn’t really matter if you find a Windforce with your polearm Barbarian, since he’s as likely as not to try to eat it rather than string it. The Hellfire expansion for Diablo 1 gave you the Cornerstone of the World, but given how time consuming it is to transfer items that way I choose not to count it.

The first Diablo was laden with quests in single player mode, with a mechanism in place to ensure that you rarely got the same set of quests in consecutive games. Basically they randomly chose some quests out of larger batches of quests, some of which were much more annoying than others like trying to find that bloody mushroom. Basically you spent your time walking stiffly around town looking for people to share your lonely pathetic existence with, while slaughtering creatures that are in most cases smaller than you, all while somehow remaining bloodstain-free, much to the pleasure of your laundry woman.

Diablo 2 gives you a bizarre storyline where you’re pursuing yourself from Diablo 1 through 4 acts, while hearing about your own exploits from a crazy old man with no remaining muscle structure to speak of. Also you might have gotten a sex change. Anyway, while playing the game you have the same quests each time, and your movement is a whole lot more fluid, owing in no small part to the fact you’re allowed to run now. Where in Diablo 1 your character had to be a certain level to advance to the next difficulty level, in Diablo 2 you merely need to defeat the previous difficulty level, and if you crave more difficulty you have the handy dandy /players x command to imitate being in a larger game.

Diablo 1 multiplayer was an exercise in why it is unwise to let players store multiplayer data on their own machines. People created their own overpowered items and gave them to their characters, and spent their time trying to find new and innovative ways to kill each other while obeying as few of the game’s rules as possible. The result was a chaotic situation that could only be adequately summarized by using a word that begins with “cluster.”

Shortly after Diablo came out, a friend of mine showed me his multiplayer character, whose items were all 100% hacked and gave him stats like 40,000 defense, 100,000% AR, and so on. The items were all named “Ice’s” whatever, and at one point he told me he wanted to teach me how to kill people by cheating in Diablo multiplayer. The multiplayer Diablo world is so polluted with hackers and cheaters that the diii.net forum actually has a thread for finding trustworthy players. There are 20 of them.

The short version of Diablo multiplayer is that if you enter a game with people you don’t know, odds are one of them is going to kill you in a way you didn’t even know was possible, and which will only be funny to you in hindsight when you realize how much of a loser the other person was to have done that.

In contrast, Diablo 2 multiplayer takes place entirely on the battle.net servers, and I’m sure there are no hacked items or ways to cheat at all, and no bots sent in to annoy you.

…okay, so that’s wishful thinking for Diablo 3, but the point is that it’s still much improved over the first Diablo. The only really prevalent cheat that I’m aware of at this point continues to be maphack, and Blizzard has made a habit of banning accounts and CD keys en masse every so often to remind people that maphack really does count as cheating.

Instead of everyone spending their time breaking rules and murdering other players, Diablo 2 online involves running to the same places over and over, killing the same people each time, and waiting for one of them to drop some items you’re particularly interested in. I have to admit I kind of feel sorry for Pindleskin, but then I think about what his name actually means and realize he has it coming.

Shortly after Diablo 2 came out I was playing a single player game and my roommate asked why I was going through Act 3. He then realized what has happening and said “Oh, you’re playing a different game than I do: you’re playing Diablo. I play ‘run back and forth until I find the item I want’.”

There are even people who make money finding items in Diablo 2 and selling them online to people who actually have things to do and don’t want to spend countless hours doing what some would call a demonstration of insanity (repeating the same actions expecting different results). Where Diablo 1 multiplayer was a giant graveyard waiting to happen, Diablo 2 multiplayer is basically nothing but a giant embodiment of an imaginary economy that some people take way too seriously. Good thing Diablo 2 doesn’t have Cloudsongs.

…and we’ll all be friends! 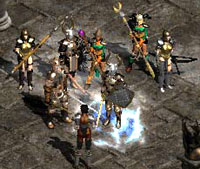 Of course, there’s an easy way around all of this for both games: play with people you know, and only with people you know. Get a group of friends together and arrange times to play, and go through the game together. That’s not to say there aren’t decent players out there, though; I let my Diablo 2 accounts expire years ago, and when I started playing again a few months ago I entered random games with random people, and after playing and joking with them for a while I mentioned that I’d lost all my stuff to inactivity ages ago, and some of them gave me items I’d only ever read about online, just because I’m a nice guy who happens to be ridiculously good looking. I want to thank them by name, but I don’t want them to get mobbed by people looking for handouts, so I’ll just say “thank you those who know who you are.”

The point in all of this is that the online gameplay experience is different than single player, but that doesn’t necessarily mean the differences have to be bad. You can usually find someone in a Diablo 2 game you’re in who’s there to have a good time, and if you’re there to have a good time also then you two will get along like peas in a pod. The problem comes from finding people who are garbage and thinking they’re representative of the overall Diablo 2 userbase, when in truth the userbase is mostly made up of robots and zombies from whom you should be hiding and covering your brain. If you look for them, you can find solid players online, and if you don’t want to do that you can arrange to play with your friends whom you trust. Now close your eyes and lean back, and I’ll catch you on my javelin.