As with most columns, I assume, there are lots of things I want to talk about in my little corner of the Internet here that I just can’t get enough out of. Either the material is too dry, or there isn’t enough to discuss for a full column, or that little angel on my shoulder taps me on the cheek and says “let’s go to a strip club.” Before starting in on the next chapter of Diconstruction, here are some column ideas that I wasn’t able to bring to fruition.

One thing that really brings the Diablo games to life is the sound effects. For every time one object hits another, a sound occurs. Sometimes it’s a sword hitting another sword (though that never actually happens in the game), sometimes it’s a tree falling in the woods (but nobody’s around to hear it), and sometimes it’s just an evil taunt from one Fallen to another about that dude Rakanishu you just decapitated, and whose feet are now adorning your keychain. But what’s involved in bringing those sounds to life? Well, it’s a seventeen step process, and today I’m going to walk you through it.

You know what really makes the Diablo games pop? It’s their visual appearance. I know, you’re thinking to yourself “graphics don’t make the game, Chris.” Well, it turns out you’re wrong. What would Crysis have been without the Cry engine? Would Left 4 Dead have really been as good if the Tank was all grainy and pixellated? And what was it, in the end, that made Pong such a great game?

The first Diablo game had a very dark colour pallette. Most things were dark and grainy, with lots of blacks, deep reds, dark greys and the like, and between the colours and the music the mood was appropriately set. Diablo 2 added some colour, because extended parts of the game happen outdoors while the sun is out. I think we all know where the colours in Diablo 3 need to go, and we got a sneak peek of it earlier: Pastels!

(Note: this part was dropped from Column 8: They Came From The Blackness) 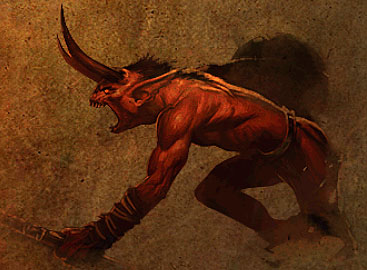 What it really comes down to is that each monster has its own style. They were able to differentiate very well between monsters by varying size, shape, colours, etc. However, there was one important decision that was made with each monster class which most people overlook, without even realizing it: To Hunchback, Or Not To Hunchback?

Let’s face it, monsters look a lot more imposing when they’re hunched over with a ridiculous hump sticking up from the center of their back. You see that Fallen over there? Now imagine it coming at you just as fast, but hunched over, drooling, and with a massive hematoma staring you dead in the face. I think I’d have to change my pants.

What It All Needs (Character Animations)

Okay, so you’re playing Diablo. You go for a few hours, and then it hits you: you’re hungry. You get up and make yourself a sandwich, using up that 3 weeks expired mayo you’ve been meaning to toss for at least a couple days now, then come back to play some more. A few more hours pass; you have to pee. Badly. After 20 minutes of the most terrifying and yet satisfying bathroom visit you’ve ever had, you return to the game for a few more hours before going to bed. And then it occurs to you: if I have to do these things, why doesn’t my character? What happens when my Amazon TitsArent2Big gets a chocolate craving? Let’s find out, shall we?

But first, what happens when your Paladin gets certain “urges” while contained within hard metal? I’ve prepared a diagram…

Alright, so you’re a demon. One of the few Prime Evils, if you will. You’re going about your day, killing things that need to be killed, maiming things when you think it’s funny, and along comes a group of adventurers summoning you from the pit to do battle. And they kill you. They always kill you. Every time. Hell, you must get killed ten thousand times a day. And it’s tiring. Can’t they just leave you alone? Can’t you just leave Diablo alone you heartless bastards!

So there you have it, a glimpse in to the development process of a column. Ideas get raised, considered, and sometimes discarded. See you next time!