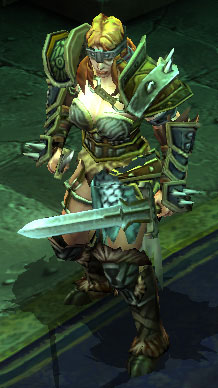 Here’s another installment of my Diablo deconstruction series, this time I turn my attention to equipment. Itamz. L3wt! The kind you wear, though, not the kind you hold in your hands, and certainly not the kind you put on your weapon switch, since as we’ve recently learned, having a button to conveniently switch between weapons is cheating.

Here’s the start of the article. Click through to read the whole thing.

Diconstruction #15: Good Lord, What Are You Wearing?

Fortunately, at least in the realm of Diablo and Sanctuary, we don’t have to worry about that because the game designers had the forethought to include clothing in the game. That’s right, even though your character starts out in nothing more than a loincloth, given enough time and patience you could graduate to pants.

In the original Diablo, you got seven item slots: headgear, armor, left hand, right hand, amulet, left ring, right ring. Apparently people in Sanctuary have crablegs for hands and can only wear one ring at a time. And all this time nobody’s belittled them for it. Just another example of how our society is slowly becoming more tolerant.

What that means is that for the entire duration of the first Diablo game, you were walking around without anything on below the waist. Oh sure, the armor looks like a full set, but for all you know there’s a serious flaw in it somewhere around the buttocks region that’s going to come back and bite you in the behind at a later date.

Also, in the original Diablo, there were 3 types of item: normal, magic, and unique. There were also items that could only be received while doing a quest, and armor that made you look like a cow, and another armor that was almost literally impossible to get. And …that’s about it, really. Those unique shredded rags sure didn’t do much to cover you up, either. Most notable about magic and unique equipment in Diablo 1 was that you didn’t have to identify an item in order to use and get the magical benefit of it, however you then risked using a Sword of Extreme Impotence, so it was still best in most cases to identify the item in town if able.

The other neat thing about equipment in Hellfire (but not Diablo) is that Griswold’s item selection varied based on what you had on your person when you went to talk to him. He’d tend to offer things that were better than what you had, but if you didn’t have any bows (for instance) he’d offer you a wealth of crappy bows you don’t need instead of a deadly sword of massive bloodshed. So what you already had influenced what you were offered, but in a really annoying way just like in real life. Just another way the first Diablo was really, really immersive.

Diablo 2 introduced several changes to the equipment system. First of all, it added another layer of items called “Exceptional,” which served as superior versions of their normal counterparts. We may never understand the mechanics of how an exceptional piece of leather can protect as much as plate armor; I suppose it’s just one of the magical properties of Sanctuary.

Next, it added another layer between magic and unique for rare items, which was basically a fancy way of saying “you know those magical attributes some items have? Yeah, these have more of them, but none of the best ones.” It also added layers to standard items, with poor modifiers (i.e. cracked) and good modifiers (i.e. superior) which affected the stats of the items in an appropriate way. I still keep looking for a “Barely-staying-together Cap of Self-pooping,” but I have yet to find it.

Diablo 2 also gave us socketed items, and the ability to customize our equipment with gems and runes in order to make brand new items the world had never seen before. At one point they said we should just toss random runes in to items to see what we come up with, in the hopes of finding new runewords, but I guess they realized we’d all just keep using them to make lewd jokes and decided to tell us what all of them were instead.

Finally, Diablo 2 also gave us new types of items to wear! Now you could wear gloves, a belt, and boots, though you couldn’t put any sockets in them (which made sense, really). So in Diablo 2 you’re now walking around with a shirt and shoes, and a belt, but nothing for the belt to hold up. I’m sure that at some point, the people of Sanctuary will develop pants technology, but that day has not yet come.

Those Shoes Make You Look Fat

The real key to all this equipment is that it lets you customize your character the way you want to, as long as it fits within the fairly rigid guidelines of what the game allows. There are only so many modifiers, and some of them are absolute trash, so over time people have learned which items are best and tend to use only those ones if possible. I myself had once figured out the ideal starting equipment for fighters and spellcasters which would easily take any character through Act 4 of Normal, and so my first order of business whenever I was starting over from all my characters having expired was to try to reacquire them.

Unfortunately, that’s how most players seem to gravitate: toward the few most efficient items, rather than toward items that are fun to use. My favourite character of all time was an elemental Bowazon using Kuko Shakaku, a very nice bow that gets almost no use because everyone’s just on their way to a Buritto Cannon or a Windforce anyway.

In an effort to stem this development, Blizzard have put spell charges on items so that characters can cast out-of-class spells. This was supposed to diversify the equipment people used, because all of a sudden there were more options. Whether they succeeded, or whether players have just found new optimal combinations of equipment, is an exercise I leave to the reader.