Chris Marks has returned with another installment of Diconstruction. In this one Chris takes on Hardcore mode, discussing how it works in D2, why he thinks it’s the only real way to play the game, and what he hopes to see from HC in D3. Here’s a quote: click through to read the full article.

Hardcore mode is simple: when you die, you lose. And you will die, at least a couple times. And losing means you don’t respawn in town and get to take a friend’s portal to your body to uncomfortably strip yourself bare, and really that’s kind of gross anyway. I mean, really, peeling your equipment off your own sagging and probably stinky with sweat corpse? I’ll pass, thank you. Losing in Hardcore means your character is dead, and stays dead. Forever. Never to return. Finished for good. The key difference here is that while dying in Softcore mode is entirely irrelevant, in Hardcore mode it’s literally everything. 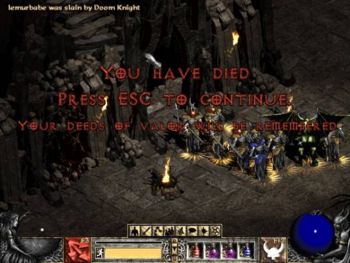 That’s right, this article is so awesome it doesn’t even need a real title. Sure, we’ve all heard the stories: “I lagged out on the cow level and the game kicked me out with 3 health remaining!” “I picked the wrong difficulty and ran where I thought I’d be safe, and died in 2 hits!” “I got out of the game just before the PKer got to me!” In most cases these stories are utterly boring, because we’ve all experienced them in one form or another, and because death doesn’t really mean much in the Diablo Universe besides some minor inconvenience as you pick up the pieces of your old self and try not to put your arm where your leg used to be.  These particular stories are all very interesting however, because they all happened to me, and they all happened in Hardcore mode.

Hardcore is a devious addition take 8 naked people up against Uber Tristram that allows you to build characters you actually care about, and who you can mourn once they’re gone. And you have to mourn them, because all those countless hours of gameplay can literally be erased with one bad Internet connection, or a single overpowered foe that’s called Mutilator instead of Motivator. I mean, let’s face it, the game isn’t really that hard if you have the patience to wait until you’re ready to advance your character before charging in to that anonymous damp hole, but once you attach real consequences to messing up, the whole thing gets a lot more interesting.

Your Flesh Is Weak

The original Diablo didn’t have anything even remotely resembling Hardcore mode, so rather than try to fill four paragraphs with empty content I’m going to try to fill four paragraphs rambling on about impote- I mean Softcore mode.  This is how most people play the game, and it’s even how I’ve been playing the game recently. Don’t get me wrong, I adore Hardcore gameplay, but right now I need to use Diablo as a relaxing escape from things that are serious, rather than something to dedicate lots of sweat to. Enter Softcore gameplay, or as I like to call it, Diablo For Sissies.

When you play a Softcore character, you play in a consequenceless state. Your death is completely meaningless in Normal difficulty, because all you lose is a bit of money (which can literally be found lying around on the ground) and a bit of time to recover your dead, lifeless body (which you weren’t spending very productively anyway if you just died in a game of Diablo). Anyone who gets mad at a Softcore death probably walks around lamenting that their coffee was a little cooler than usual, or complaining about driving through a puddle. These things are stupid because they all don’t matter.

Softcore deaths only take on any sort of meaning (and that meaning is tenuous at best) in Hell difficulty, because you lose 10% of your achieved experience toward the next level and getting experience in Hell can be difficult depending what level you are. A Normal difficulty death costs you a few seconds, but a Hell difficulty death can cost you hours, or even days. Weeks, even. I know one person who lost 4 months of progress in one day. Can I stop exaggerating to make my point of how unimportant a Softcore death is yet?

Basically, Softcore is for casual gamers who want to play with nothing to lose. The game doesn’t require a lot of attention, and let’s face it, most of you are just going to tag along on Bloody Foothill or Baal runs for your entire gameplay experience anyway, so it’s not like you’re really risking much in the first place. When the next patch comes out I’m switching back exclusively to Hardcore play, and you guys can keep your Softcore mode to yourselves, because Hardcore is where the big boys play.

My Shins Can Shatter Trees

Hardcore mode is simple: when you die, you lose. And you will die, at least a couple times. And losing means you don’t respawn in town and get to take a friend’s portal to your body to uncomfortably strip yourself bare, and really that’s kind of gross anyway. I mean, really, peeling your equipment off your own sagging and probably stinky with sweat corpse? I’ll pass, thank you. Losing in Hardcore means your character is dead, and stays dead. Forever. Never to return. Finished for good. The key difference here is that while dying in Softcore mode is entirely irrelevant, in Hardcore mode it’s literally everything.

That means playing Hardcore mode is hard (imagine that). In Softcore you can basically do anything and get through the game. In Hardcore you really need to pay attention, because if that health globe of yours falls below a certain point then it’s time to make a run for it, or all your hard earned shiny objects will be lost and your well spent time along with it. You only get one shot, and then you have to rebuild everything from the ground up. Unless you let your party members loot your corpse; then you just need to make sure you’re playing with trustworthy fellows.

Of course, with the added risk comes added glory. Reaching level 99 in Hardcore mode is much more impressive than it is in Softcore. As of the time of this writing, on the USEast realm there are 186 level 99 characters on the Softcore LoD Ladder, and only 16 on the Hardcore ladder, and one of them is dead. The 1000th place character in Softcore is level 97, and the 1000th place character in Hardcore is level 94 and also dead. Same with 999, 996 and 993. Not only is reaching a high level more impressive, but you also get significantly more attention when you do something crazy like contact the author.

My favourite part of Hardcore mode is what you look like when you’re dead. Everyone’s the same when they’ve passed on, according to Blizzard, and as such you appear as a faceless, ghostly figure in a gray robe, and everyone around you in the chat room knows that you have died a warrior’s death and shall honour you until the end of their days. Unless you’re like Cannon Fodder over there and died in the Blood Moor to 3 Fallen. Then you’re kind of a tool and probably had it coming. I only died there because I was trying to. Honest.

What Are You, Chicken?

When it comes right down to it, If you’re at all serious about the game you should be playing Hardcore. Getting a high level Softcore character doesn’t mean anything because anyone can do it. Getting a high level Hardcore character takes dedication, devotion, stamina, attention and care, like a marriage you don’t plan to throw away at the first sign of trouble because you’re a celebrity and don’t know any better.

The sense of accomplishment that comes with finishing Hell difficulty with a Hardcore character is so much greater than that of finishing with a Softcore character that if I were to try to explain it to someone who has never played Hardcore, their heads would explode in a big gut-filled red gory mess that permanently stains the fur of the cat, and since in real life you don’t get to put yourself back together and start over again, they would understand Hardcore mode in the most ironic way possible. Now if only there weren’t so many PKing cowards in it.