It’s been far too long since our last wiki watch update, but the recent updates are so legion that it’s hard to know where to start. Besides all of the updates to useful things like active and passive skills, runestone effects, and artisan recipes, we’ve been adding in a good amount of data mined info that you can not find on Blizzard’s site. 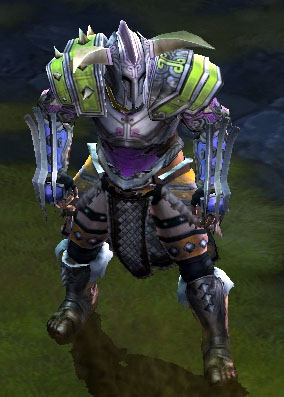 Armor Dyes are a good place to start. Not only does the page list every armor dye and the lore entry for it, but there are screenshots showing off every dye in action, with before/after views of the same character. Thanks to Risingred for uploading all the images, one of which spotlights the remarkably-colorful Barbarian can be seen to the right.

While I don’t think armor dyes are real spoiler-sensitive, a lot of other recent wiki updates are. Thus while we’re adding the images to the wiki, they’re not embedded on the various pages. You have to click on links on those pgaes, which are spoiler warned, to see the high level skills, rune effects, Act 3 and Act 4 monsters, etc. So you can click all the following without spoiler worry, and then follow the links if you want to see that which has never-before been seen.

One other non-spoiler. I gave the

attributes page an overhaul, adding in new beta info, and as I was working on it I realized something. I’ve paid almost zero attention to my character’s attributes in the beta, and I don’t have any real sense what they do. I *know* what they do, from reading the tooltips, but I don’t have any intuitive, hands-on sense of them, and that’s entirely due to the convenience of autostats in D3.

In D1 and D2 you allocated your own stats, and thereby learned (roughly) what they did as you leveled up. You saw your damage increase from more strength, your hit points from vitality, your to/hit from dexterity, etc. Since you never add stats and observe the changes in D3, you never get that direct tutorial-style feedback. That, plus the fact that the attributes were recently changed to non-traditional titles/functions, means that most new players will have no idea what their attributes do. I will bet that come release we’re going to see countless forum threads asking what the stats do, which ones are best for Wizards, how

armor, etc. And won’t that be fun?

What Happened to the Ob/Zod?

Getting Your Hands on the new Hellfire Amulet