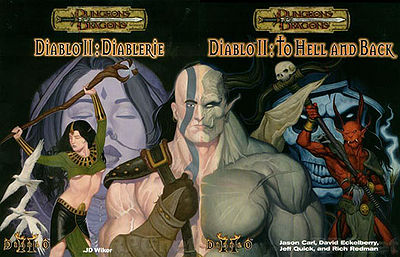 Havok physics). The world is vibrant with information and experiences that go beyond mere graphics.

Of course, you might think of the many novels written by various authors to flesh out

Sanctuary, but while those are both interesting and entertaining, this is about actually entering the world of Diablo in a (sort of) literal sense.

What you probably never heard of before is the Diablo II pen and paper roleplaying game. The various games and moduels were made back in 2000-2001 for the Dungeons and Dragons franchise but despite containing some interesting facts it never caught on to be as popular as the WarCraft Roleplaying Game is today. Not that the WC RPG is massive by any RPG standards…

The validity of this information, and whether or not it is

canon is unknown (as is true with all RPG books), but Blizzard have said all previous official sources of information are canon with the exceptions of any

retcons. You can read it and decide for yourself after the break! 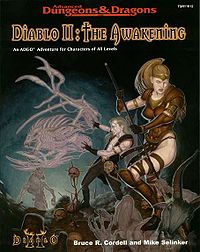 Diablo II was released not long before DnD changed to the much improved Third Edition of their rules, so the first roleplaying game for Diablo, named The Awakening came out in the older “AD&D 2nd Ed” system. Since it was in production at the same time as Diablo II was developed the book includes content not available in the PC game.

Among other interesting facts, the Dark Wanderer is named as Qarak, the last surviving member of the Order of the Gauntlet, an order of adventurers.

“The adventure starts in

Tristram, the battleground of the original Diablo game, where Diablo, Lord of Terror, rules a legion of demons. There, the heroes explore the mysterious Monastery – full of dangers and challenges pulled right from Diablo but enhanced for your tabletop game!”

If you were interested in getting your hands on it, you’ll have to look for a second hand copy. As you may have guessed, it didn’t have a second printing.

Diablerie – What is that? 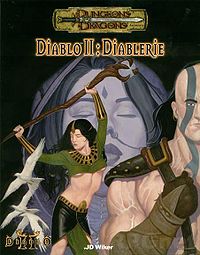 Later in the same year, Diablerie was published, but in the much more streamlined D&D 3rd Ed.

It features the five classes from the original Diablo II:

The material also includes one simple adventure to explore the “Morgen Keep”, and save an item called the “Siegehammer” from the demon “Crushskull”.

Diablere received terrible feedback from fans for it’s low quality and lack of insight into the then new D20 system. The fact that it was only just under a hundred pages long probably didn’t help either.

To Hell and Back 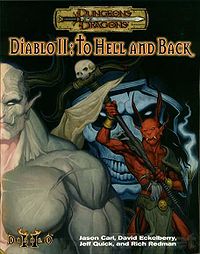 The much longer (almost two hundred pages) stand-alone “supplement”, To Hell and Back, was at least appreciated as a nice monster supplement to traditional roleplaying with the wide variety of Diablo II creepies.

The book contains quests, adventures and monsters as well as rules for hirelings (the Rogue, the Desert Mercenary and the Ironwolf). It’s possible to play this module without Diablerie, but more Diablo world gameplay is available when using both.

A super-dungeon-crawl for use with the Diablo II rules for D&D. Includes every level level and all four acts of the computer game.

All in all, interesting to get to read, but in practical terms, not that useful. As you can see, the fronts of the two books fit nicely together, however! 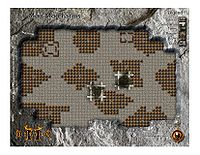 What’s quite funny is the fact that these two roleplaying books actually have content for the Secret Cow Level, which still can be downloaded for free online if you are so inclined.

“The Secret Cow Level is the most popular Easter egg in computer gaming history, and now you can milk it for all it’s worth in your D&D/Diablo games. All you need is a party of adventurers powerful enough to kill Diablo. You do have one of those, right? No? Well, send ’em back to Hell till they’re tough enough to take out a demon lord. Because when they’re done with that, a thousand moo-licious bovines intend to inflict udder depravity until they lay the adventurers low. Are you still checking your vision on that last paragraph? That’s right, we said a thousand cows, all with poleaxes. Got damage resistance?”

Quite simply amazingly weird. Considering how D&D combat works, that sounds like a whole day worth of just constantly rolling dice… 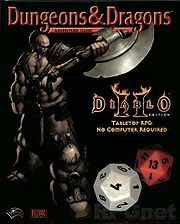 The third related release is the DnD Adventure Game: Diablo II Edition (sometimes known as The Bloodstone Tomb, after it’s content) and is a DnD stand-alone tabletop adventure game that basically is “DnD for newbies”, but this one has a Diablo II twist.

It’s a very simplified version that is made for younger players, to introduce them to the more advanced DnD rules. This version is of course made to attract Diablo II fans into the DnD world.

Sorceress) and dices to play from the minute the box is opened. The game can also be downloaded for free from Wizards of the Coast’s homepage, if you have the dice yourself.

Necromancer was left out could possibly have been a practical fact such as it would be quite hard to adapt rules to apply to minions and the summoning and management of them. This book is interesting if nothing else then for the “new” artwork in it.

Looking to the Future

If we’ll see more of the RPGs is likely just a question of time. The WarCraft franchise has done well for the RPG, and Sanctuary has a lot to offer. The fact that many Warcraft fans bought the RPG books just to get an insight on the lore shows there’s more of a market than just the D&D fanbase.

Blizzard has also taken a lot of inspiration from D&D in Diablo III, with spells like

Magic Missile. It would be surprising if they do that and then not allowing RPG fans access to the world of Diablo.

Regardless, it won’t be released before the game itself, so once again, we’re waiting for Diablo III!