The Blizzard Twitter feed coughed up a nice tidbit about a returning monster, this afternoon:

One of our new creatures is a memorable D2 throwback – more to come at BlizzCon.—Diablo

So… who could it be? It says Diablo 2, so that rules out The Butcher or Lazarus, and we already know that the

Skeleton King is returning. Bashiok might mean a D2 SuperUnique monster, but he’d probably have said “boss” then, so likely he’s referring to a regular monster type. Which are memorable?

We already know quite a few Diablo 3 monsters, and lots of them are returning from Diablo 2. Confirmed returnees include

Wraiths. So what are some other “memorable” Diablo 2 monsters that we’ve not yet seen in Diablo 3? Here’s my quick list: 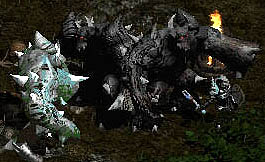 I took the “memorable” instruction to mean memorable, and enjoyable. Most of us remember every single monster in Diablo 2, but if you’re sitting around hoping to see more of the boring/forgettable monsters like Reanimated Horde, or Tainted, Giant Mosquitoes, or Sabre Cats, I can only wonder at your priorities.

So, any guesses? You might factor in the likelihood that we’ll see a new area this year, and that it’s expected to be Act Three-ish. Jungle-y! Thorned Hulks? Death Beetles? Finger Mages?

Click through for the best bets for “memorable” returning D2 SuperUniques, just because I had fun writing/thinking about it, and it was a shorter list than the regular monsters.

On the other hand, what if he means a superunique? The full list of Diablo 2 SuperUniques is enormous, but how many are truly “memorable?”

Here’s my quick list by act, which you are free to disagree with/supplement: Bishibosh, Blood Raven, Rakanishu, Coldworm, Fangskin, The Summoner, Ancient Kaa the Soulless, Izual, Hephasto, Lord de Seis, Shenk the Overseer, Pindleskin,  Nihlathak, Lister the Tormenter, the Cow King. I didn’t include any act bosses since it seems unlikely they would reveal any of those yet.

Tomb Vipers are in the game, so maybe Bishibosh, Rakanishu, or Fangskin? But we’ve already seen those monsters in past BlizzCon builds. So maybe it’s a monster type we don’t know about? Or that we at least haven’t seen in the game yet? So many possibilities.