@Diablo returned to action today after an inactive week, and fielded questions on a variety of issues. Here are the quotes, sorted by topic and color-coded, for easier reading.

Completely random. It helps make sure you’re looking forward to the possibility of a drop for you, and it facilitates trade.—Diablo 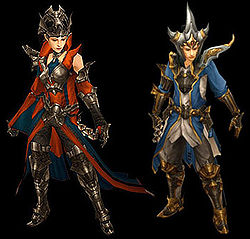 can we expect screenshots of armor tiers we haven’t seen yet prior to the release?—FingolfinGR

Probably a few more, but we want to keep most of them as a surprise.—Diablo

will the defeated of the winning team in the

hardcore even if the team wins?—FingolfinGR

Current thinking would be if you die in the arena, you die regardless of the outcome. We’ll have to see how it feels.—Diablo

Does the DH’s resource system of

Discipline interact with each other or are they separate systems?—Scyberdragon

We’re not talking about the resource system just yet beyond what’s been said about the dual nature of the skills.—Diablo

Town Portals recently. Are they completely out of the game? Or are they in, with restrictions?—AcidReign87

They’re down, but not necessarily out. It’s going to take a lot more playtesting to see if it causes any issues.—Diablo

Nice to hear that the devs aren’t entirely fixed on their HC Arena initial plan, which would have been conceptually cool and “hardcore,” but had a practical result of no one ever actually playing HC Arena. As I and others have repeatedly (endlessly) argued, having only a perma-death HC dueling option just means HC players who want to duel regularly will have to play SC chars for that purpose.

Elsewhere, I must admit I’m surprised to hear that

Town Portals might return, in some form. Jay Wilson was as definite about the reasons behind their demise as he’s been when discussing any game feature. After all the devs said about how TPs ruin the immersion and screw up the combat by allowing fast escapes and trips to town… how can they come back? Maybe only under special circumstances; like after defeating an Act Boss, or as one-way portals to allow a new player in the game to quickly join the party?