@Diablo made a couple of replies today, sharing a bit of new info and a socketing joke.

How are the Runes going to drop in Diablo 3? Is it going to be like items or is there going to be an another way to acquire them?—Dave_Lovejoy

They can drop off monsters as you kill them, and the Mystic artisan will be able to craft them for you as well.—Diablo

Will pants in D3 feature pockets? To increase inventory space? Will the blacksmith be able to add pockets to pants?—Varquynne

It’s not clear how crafting runes might work. From what we’ve been told, the whole point in D3’s crafting is that it’s like gambling, where you roll the virtual dice on semi-random modifiers. But runes don’t have anything like prefixes or suffixes. (As far as we know… though it seems like some kind of rune prefix/suffix would be a good Expansion feature.) Runes don’t vary in their stats; they’re like

Gems. There are five types of runes and seven quality levels of each type. Thus an Artisan mechanism to upgrade runes seems iffy, as powerful as runes are and as in demand as high level ones will be. If there’s a rune level upgrade it has to cost a LOT of runes or gold. Or both. 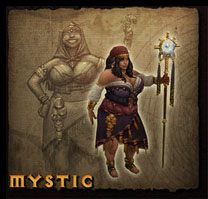 If there’s rune crafting/gambling though, that could be more interesting. The recipe could add randomness by only making the rune some % of the time, or else making a rune of semi-random level, with a very low % chance of spawning high level. I’ve always wanted rune gambling in Diablo II, along those lines. Say it was 100k per gamble, and you had a 90% chance of an El and 9% chance of Eld, but in that 1% of luck you could potentially roll a high level rune. Would that be worth it?  (Or adjust the math/payoff until it became viable.)

It’s hard to say how the price would work in Diablo II, where gold was largely ignored in the

end game. Things will be different in Diablo III if the

economy works as the devs keep saying they want it to. In that case, Runestone gambling could be an important element of equipment finding as well as a viable