@Diablo today continued their recent, “meh”-inducing habit of answering basic game questions that are (no doubt) often asked by newcomers to the game, but aren’t of any use to those of us who have been following along for a while.

It’s a pity (as debated at great length starting around post 50 in this mega-thread) that Blizzard’s corporate PR policy doesn’t permit their game sites, official twitter feeds, or CM forum posts to link out to fansites, since it would certainly save Bashiok and his fellows a lot of time and effort re-explaining the same basic game features over and over again. Today’s example comes from @Diablo, with a question on

health globes that’s been answered on our wiki page since the day that feature was unveiled.

When a health globe drops, the entire party can see it, right?—AcidReign

Correct. And they apply to all friendly nearby people, even NPCs.—Diablo

Update: Click through for some discussion of how health orbs share their bonus in the Arena, with a nice little sequence of this demonstrated from the Blizzcon 2010 Arena gameplay movie.

Health Orbs in the Arena


Spurred by SavalBork’s question in the comments, I took at look at the

Battle Arena portion of the 2010 gameplay movie, and took a few shots from it to illustrate the point. In this three shot sequence, the blue Witch Doctor grabs the health orb to the far right, healing everyone for 40% of their maximum hit points. That’s 339 for himself, 407 for the blue team Barbarian, and 120 for each of his Mongrels. The total amount to be healed was displayed immediately, but the hit points took a few seconds to fill in. 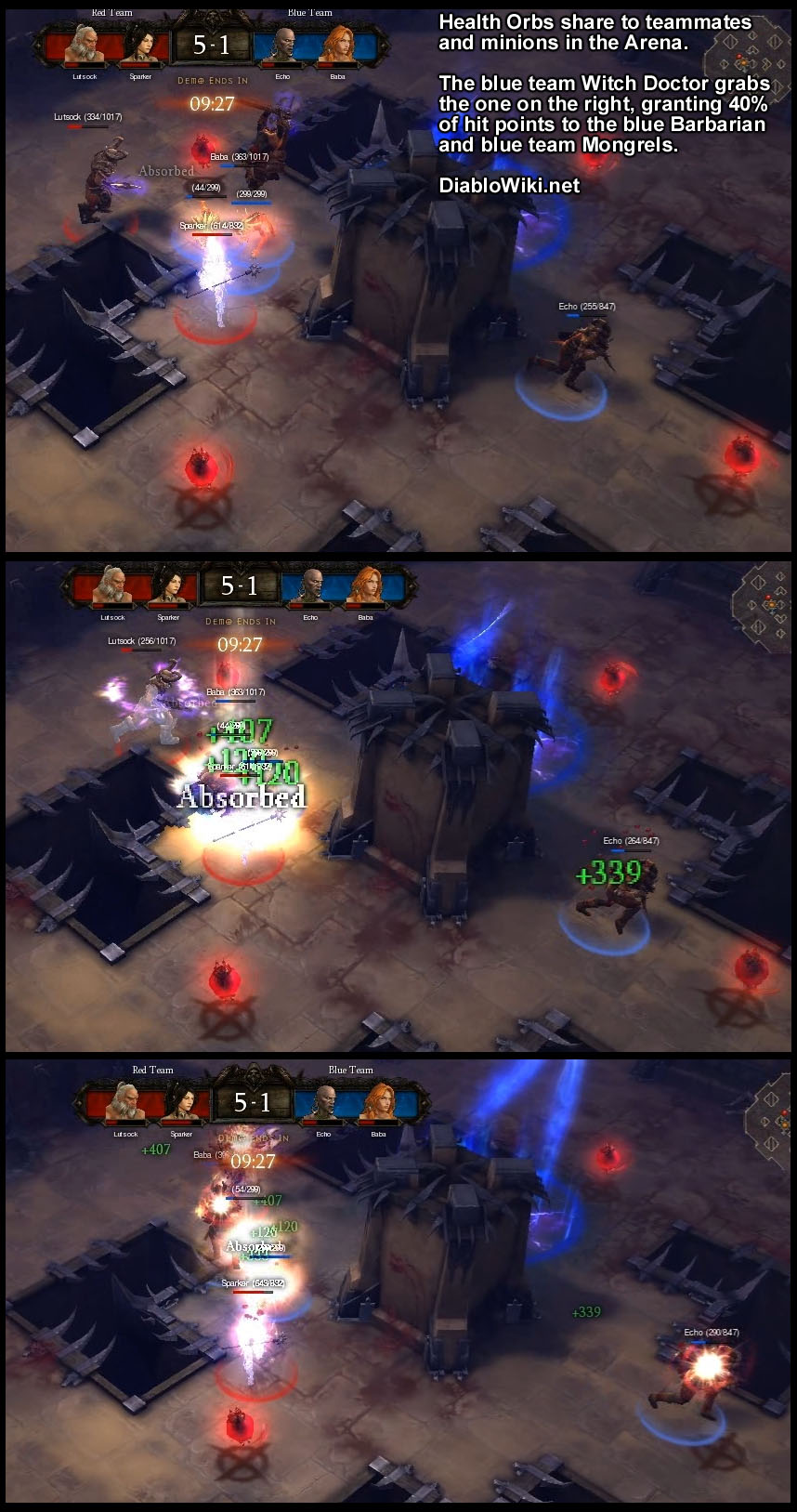 In these shots you can see some desynch; the green hit point healing shows up several frames before the Witch Doctor actually grabs the orb. This delay/desynch between the displayed hit point change and the events on screen might be a contributing factor to the continuing mystery of just what

Disintegrate is doing with the damage, double-damage, and turning red or purple. I took another long series of shots of that since there was a good one right after this health orb thing; check the forum thread for that latest addition to the ongoing mystery.