@Diablo engaged in the first real action of the new year today, with a variety of posts, most related to the Wizard’s

Some work has been done on Charged Bolt to help make it feel a bit more like it did in Diablo II. —Diablo

Explain.—Grug16
It functioned in very rigid ways when jumping between targets, but has gained a lot of the erratic and ‘lightning’ feeling back now.—Diablo 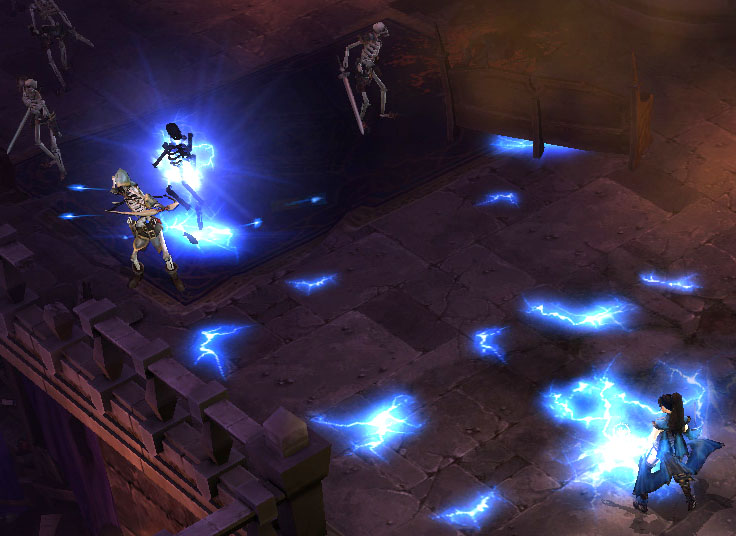 Diablo 2’s Charged Bolt skill was weak late game. Is the skill more viable in Diablo 3? Any word on rune effects on Charged Bolt?—NocturneGS
My favorite rune is when something dies from charged bolt it can explode and cause lightning damage to monsters nearby.—Diablo
As far as scaling, that comes down to balance, so yes, it should probably be viable at all levels. —Diablo

I’m glad we’ll get to say goodbye to the skill power-hierarchy in Diablo 3. +1 for making all skills useful.—NocturneGS
Well let’s not have delusions of grandeur. With the variety of skills multiplied by runes, some will just be better than others.—Diablo

end game” content start in D3? After max lvl or after finishing the main story (on hell difficulty) or somewhere else?—The Eliminator

Depends on your definition of end game. Max level happens at end of Normal, so probably Hell, if that’s what you mean.—Diablo

As best I recall from using it at Blizzcon 2008, Charged Bolt in D3 felt very much like Charged Bolt in D2 (and D1). From the comment here, it sounds like the pathfinding was changed to a chaining, rather than a random scattering, at some point, and has now been changed back. It’s hard to say this without having tested the modified version, but it sounds lame. The whole point in Charged Bolt is that it sends out a huge (at high levels) scattering of randomly jittering little sparks, providing solid ground cover at the expensive of speed or targeting. A major change in the skill that shifted that would make it not really be Charged Bolt anymore, IMHO.

Big changes to basic skill functions, like what @Diablo described, can/should be done with

Runestones. Not with the default skill itself, IMHO.