A fan asked about Arena maps today, and @Diablo replied.

Are there going to be more arena maps or only one shown at blizzcon ?—Spectrusv

We’ll have as many arena maps as we can.—Diablo 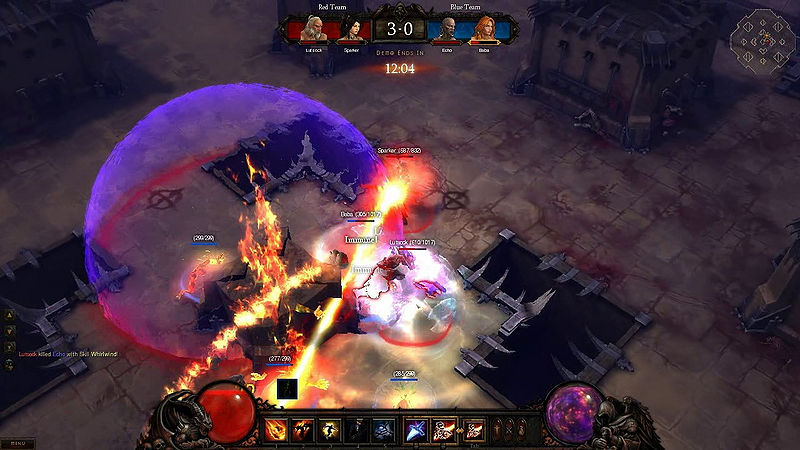 One flaw in much of the D3 debate is that players are bringing too much of their Diablo 2 experience into the discussion. Obviously there are a lot of similarities between the games, but just as it’s pointless to bring up D2 builds in arguing for or against the 7 skill limit in D3, comparisons to D2’s PvP fall short. In fact, I’d say that the experience of PvP in D2, even of dueling in D2, has very little predictive value when it comes to D3’s

This is true for a lot of reasons (team-based combat, winning is total kills in a time period, skills rebalanced just for PvP, no oskills/melee chars with Teleport, etc) but one of the biggest factors is the arena itself. Though today’s tweet actually tells us nothing about how many maps they’ll have, if we assume they’re all somewhat comparable to the Blizzcon demo arena (with a reasonable size limit and lots of obstacles) that will make a huge difference in dueling. In the D3 Arenas characters will not be able to just outrun attacks by traveling over long distances, they won’t be able to duck into the safety of town, ranged attackers won’t be able to endlessly spam Guided Arrows or Blessed Hammers across a huge open space, etc.

Different arena configurations will alter these facts, but the simple fact that we’ll see combat within an enclosure of limited size, with available cover, immediately negates a considerable number of the most effective (cheesy?) D2 dueling builds.