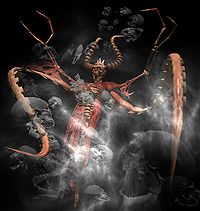 Diablo universe – according to some of its inhabitants): Tal Rasha. This unfortunate

Baal, but why is it that

Diablo even managed to become the

Dark Wanderer and free his brother from his shackles? 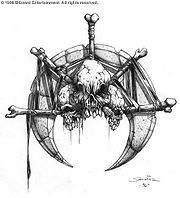 Some months ago we focused on Diablo himself, but this time, it’s Mephisto who is up for closer inspection. Out of the three

Prime Evils, Mephisto is the oldest one, allegedly the weakest but also the most cunning and definitely most evil.

He has unmatched skill in manipulating the

undead for dark purposes (as opposed to

Necromancers), and he is, inadvertently one of the initial forces behind Sanctuary even coming to existence, and even keeping it from destruction.

Lilith, and the Angel

Inarius became lovers, as did other demon and angel kind. Their offspring,

Sanctuary, and tried to exist beyond the

Diablo: The Sin War describes most of these events. The first of several “

Sin Wars”. As you may or may not know,

Tyrael and Mephisto were the two primary figures to let Sanctuary exist after it was found out.

The Prime Evils saw more potential in the world, however. With severe limitations on how to draw magical energy from their home realm when on other planes (such as fighting Angels in the High Heavens) they found out human souls were an excellent source of energy that lacked limitations of their native powers. A full scale attack on Sanctuary would just bring Armageddon upon it, and vanquish a possible weapon to once and for all defeat the

The then already corrupt angel

Izual approached the Three with the idea of using the Angels’

Soulstones to get direct access to their home realm powers while manifesting on Sanctuary, enabling them to rule the mortal world, reap it’s energy and defeat all Angels.

Lesser Evils into making an uproar, exiling them to sanctuary in severely weakened spirit forms. In this way, the Angels anticipated an attack by the Lessers, while not too concerned about the weak spirit formed Three on Sanctuary. They withdrew their troops from the mortal realm, leaving humanity to fend for themselves.

Capturing The Three
This is when Tyrael helped create the

Horadrim and, not knowing of Izual’s betrayal, gave Soulstones to the human magi to capture all three demons.

Mephisto was less weakened by the imprisonment than Baal and Diablo, and managed to manipulating the local

Zakarum priesthood to his own ends. He sent them on crusades, among other places

Tristram where Diablo was imprisoned.

End of the Sin Wars

This was the beginning of the end for Mephisto’s success. When the

Dark Wanderer turning into his true demonic form, he brought adventuring heroes in his footsteps to Mephistos hideout. They defeated him and destroyed his Soulstone on the Hellforge. Exactly what happened to the oldest Prime Evil after defeat is not known.

Destroyed or just banished to Hell, it’s rare that evils like these are permanently defeated…

If this little intro made you interested in the back story of Diablo, make sure to read the full wiki article about

Mephisto in the Diablo Wiki with quotes, pictures and additional information.