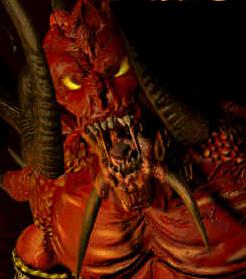 Prime Evil couldn’t possibly miss an appearance in a game named after him. We’ll see more of

Diablo — he wouldn’t miss it for the end of the world!

Somewhere deep, deep down, Diablo is somehow managing to licking his wounds and rebuilding his power, waiting for the opportune moment to strike. Knowledge of being defeated by mere mortal men not only once or twice, but three times, stings harsher than any wound. He’s coming back and he’ll be bigger, redder and meaner than ever!

Sanctuary originally was created, Diablo and his brothers saw their chance to gain enormous powers from the newly born

Nephalem. As you know, it was originally

Tyrael‘s plan to destroy the world and these “abominations”, so in that particular instance, what would be come humanity might have sides with

Hell! However, Tyrael changed his mind drastically, and saved Sanctuary, while the three Prime Evils were forcefully evicted from their thrones in hell by their Lesser, but more numerous, brethren.

Trapped on the mortal realm, the Three had the time of their life, spreading Hatred, Destruction and Terror among the weak, mortal, humans. Still searching for a way to take revenge upon the Lesser Evils, they came across the

Horadrim, a powerful group of human mages from across the world, intent on defeating and capturing the Three Brothers in

Soulstones forged to forever keep the demons safely stored away from humanity. Tyrael was behind both the Horadrim and the Soulstones, and they succeeded in capturing

Baal after much sacrifices, hunting onwards for the youngest: Diablo.

In an epic battle, Diablo was defeated and captured within the Soulstone, placed in the Horadric monastery that unfortunately later would be come

King Leoric mad, starting wars he could not win and kidnapped his son, using him as his new mortal host.

While an anonymous hero finally defeated him, the warrior foolishly tried to encapsulate the Prime Evil within himself, losing his soul to Diablo, becoming the

Somehow, Diablo managed to bring the Lesser Evils back under his foot, and both

Duriel helped impair any attempt at catching up with Diablo’s journey to release his brothers.

He was, however once again followed to Hell, where the pursuing heroes unlocked five seals to summon him in his Chaos Sanctuary. After defeating Diablo the heroes destroyed his soulstone, banishing him from Sanctuary back to the Burning Hells.

If this was a permanent death of Diablo or not is unknown, but such an evil rarely dies easily.

To read up more about Diablo, make sure you read the updated