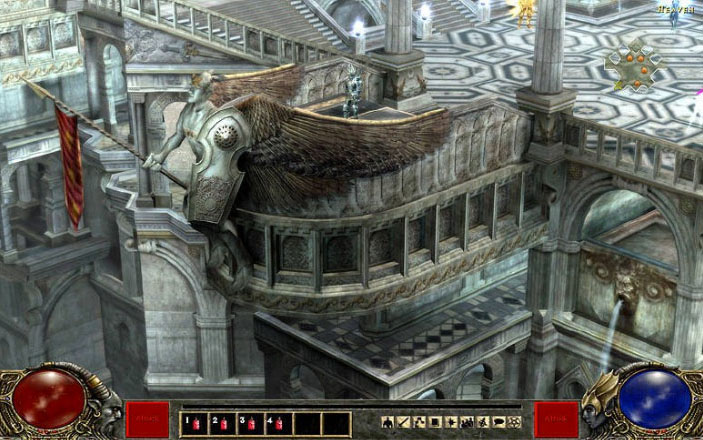 Diablo III: Blizzard North version. There’s nothing new in the article, but it’s a nice reminder of what might have been, especially now that we can see many of the same (type of) areas in the Blizzard Irvine version of Diablo III.

The original shots are from 2005 (all the screens in this post are from the 2005 version) and were from a far-from-finished game (especially the interface), so who knows how that game’s High Heavens would have looked in the final product, but it’s obvious that the concept at least was embraced by the new D3 team. I’m not including any side by side shots from D3 for the .03% of people who might not have seen it in the game yet, but the rest of you can compare these shots to your own recent memories.

The Forbes article is brief and only has a few of the shots in not very large size. If you want much more gruesome detail about how the original version of Diablo III began and ended, see the article in DiabloWiki. Also, our gallery has every one of the leaked screenshots in much higher quality, plus other pics showing off some of the monsters from the D3 that never was.

We ran a vote back in February 2011 when these shots first appeared, asking which art style you guys preferred. The older D3 won, by a slight margin, but that was long before we’d seen any comparable areas in Diablo III. So let’s revisit that issue now, shall we?

Which version of the High Heavens do you prefer?

Diablo will never be an MMO says Blizzard