TheMarySue.com, a “Guide to Girl Geek Culture” has posted an article about the realistic (relatively speaking) appearance of the female characters in Diablo III. The piece isn’t a straight out class-by-class comparison, and it references the presentation of females in WoW and Starcraft as well, but it’s an interesting perspective on the topic. 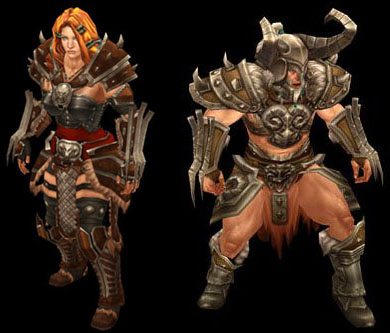 The article praises the female Barbarian for having muscles (thighs especially) unlike the silly, wafer-thin female battlers some games offer, and appreciates that the genders tend to wear equivalently-styled armor, rather than putting the guys in tin cans and the girls in chain mail bikinis. Yes, Witch Doctor and Barbarian females wear cloth bikinis in the early going, but their male counterparts fare no better. (The piece doesn’t mention

So while it’s too early to say how Diablo III will measure up, the female character models shown thus far have me feeling very encouraged. For starters, they are all wearing plausible armor. Their stomachs are covered. The only one who looks a bit waifish is the Wizard, which makes sense, and even she looks like she can tear it up. But the best of the bunch, in my opinion, is the Barbarian. She’s broad-shouldered. She’s buff. She’s got big, muscular thighs, which is exactly what you need if you’re going to be swinging an axe all day. And before you scoff at her bare legs, take note of what her male counterpart is wearing. This armor isn’t meant to be revealing; it’s meant to portray a particular culture. If you’re going to have armor that doesn’t cover a character from head to toe, this is exactly the way to do it. I believe this armor. I believe this character. This is a woman whose physical appearance meshes with the narrative context in which she is presented. Really, that’s all I want to see in a character model, and to find it in Diablo III was a pleasant surprise. Granted, the way your character is dressed in the game will depend on what armor you equip, but the fact that this is the public image they decided to give these women is heartening.

Are the designs perfect? No. Are the starting outfits for the Demon Hunter and the Wizard a bit irksome? Yes. But if we look at these character designs in comparison to the last fourteen years of Blizzard titles, it’s clear that things are continuing to improve for their female characters. And that’s something I can definitely get behind. Obviously all the gear in the game is very stylized and fantasy-tastic and such, and we’ve had some enjoyable debates about the over-the-top Inferno gear. But whatever faults you may find in the function of the

gear sets, you have to admit that the character models and their outfits are treated with some gender neutrality.

While more gamers are male than female, recent studies and past WoW data suggest that women make up a considerable percentage of Blizzard’s audience. Data on female approval of the chain mail bikini style of female fantasy character is less readily-available, but male approval might be lacking as well. After all, just because you enjoy the visuals on a character doesn’t mean you don’t think it’s appropriate or believable in the game.

Most of us (male or female) enjoy eye candy in our games, but do you appreciate that D3’s female characters have some realism to their body types and clothing? By the same token, do you like that the male characters aren’t all steroidal monsters with pin heads? Or would you prefer the comic book style of mega-hulking dudes and lingerie model females, as still seen in many Asian RPGs?