The Skill Trees all attendees of last year’s BlizzCon played around with in the Diablo III demo was merely a prototype or placeholder.  According to Bashiok, the current Diablo III allows you to see all trees at once side-by-side in the same window.  You can distribute points of Tier 1 seamlessly across any of the three skill trees. Once you reach the set limit, you will unlock Tier 2.  It is a very different way to what we are used to in Diablo II and even World of Warcraft.

Bashiok is confident to confirm that this system allows more variety.  What fans do not account for is that there are ways to customize your characters with the new rune system, and there is yet other unrevealed ways to improve your character.  Hopefully these will be revealed in August at Blizzcon 2009.  At the moment it remains a mystery.—source

(The image below is the old skill tree style, from last month. All changed now!) 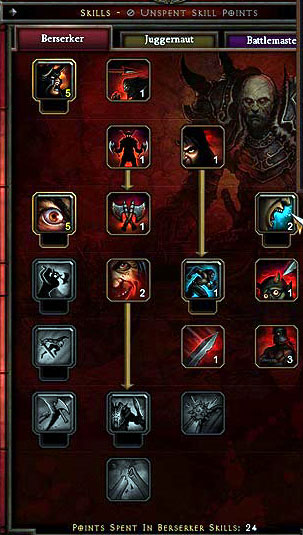 Bashiok: As you mentioned and I had said in that rather lengthy post, we