Fmulder unearthed an interesting tidbit about the upcoming

Book of Cain. It’s from the blog of artist Jean-Baptiste Monge, who contributed 23 pieces to the Book of Cain. He’s not the only one either; numerous well-known fantasy artists also have their work in the book, along with Blizzard’s own artists and writers. Quick quote:

I have worked some months ago for Blizzard Entertainment on the great and so expected artbook Diablo III : Book of Cain – published by Insight Editions (available on pre-order on amazon : HERE) 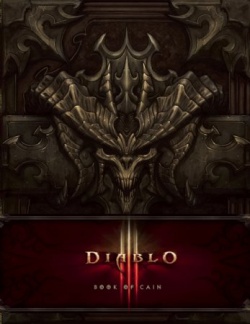 I have been so happy first when they wrote me. In fact I have been a Diablo player addict for years so it’s like a complete circle : in front of the computer to play like a fool and in front of my table to draw their creatures like a fool. YEAH ! And after I have been completely excited when I knew who would draw with me on the artbook. I feel very honored and privileged.

Book of Cain with a release date of November 25, 2011, though as we all know by now, dates related to Blizzard products are very subject to change. Check the

Diablo 3 Merchandise section of the wiki for all known info about the title, plus a selection of sample pages.

In other Diablo III book news, the first

Diablo 3 Novel has been listed on Amazon.com, though there’s a lot less info about it than about the Book of Cain. It’s untitled and there’s no cover artwork, but the author is revealed as Nate Kenyon, and the book has a March 27, 2012 release date.

Kenyon wrote the last Starcraft novel, but his four other published novels are original works in the horror genre, and they’ve won a number of awards. It looks like Blizzard wanted to bring in some fresh meat blood for the Diablo III novels, rather than going back to their usual hired guns Richard Knaak. Note that the upcoming title is listed for $17, and as a hardcover, which seems an upgrade from the $8 paperbacks Blizzard has published thus far.

All Diablo 3 Games now on Sale including Necromancer Pack