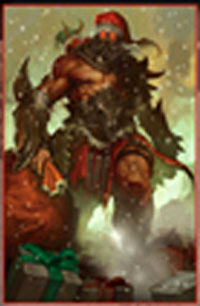 A new Diablo III 2011 Wall Calendar by Sellers Publishing is now available for pre-order. This calendar features lots of great artwork including shots of

Tyrael. Judging by the sample gallery, there are two new pieces of art (which is 2 more than the 2010 Diablo calendar had); the top right Barbarian concept art evil Santa Clause Barb?), and the lower right view of Tyrael with shining wings.

The calendar hit stores on July 25, 2010 so go grab them before they are gone in the blink of an eye. They’re not yet in the Blizzard store, but for now you can pre-order them via Amazon USA and Amazon UK.

Baal set out on a vicious rampage, twisting humanity to their unholy will. Now Diablo III surfaces amid the rising powers of the Burning Hells. This calendar’s twelve images of the Diablo III universe?an ethereal realm?will mesmerize fans of the game and dark-fantasy aficionados alike.

The cover features a familiar image of Tyrael, but note the kinda LotR-esque quote, “Hope remains within the hearts of men.” Some insight into the tightly-guarded game plot? An actual quote from Tyrael? Or perhaps just a generic statement reflecting on the thematic tone of the game…