I’m not as knowledgeable as Flux and all the denizens of our Diablo 2 Community Forum or the Diablo 2 Single Player Forum, but I’m learning as I’m ploughing through the Diablo 2 Wiki.

In the past week or so, we’ve worked hard on two things. The first is a way to make tabs on navboxes (the little box most often found at the bottom of the page), which you’ll see more of next week. The second thing is the more substantial change. It’s a new information box for items, which allow users of the wiki to add their own favourite Unique and Set items to their very own pages. It also works with full Item Sets.

Take a look at M’avina’s Battle Hymn here to the right. This is a small example of how set items work, and to the left is an example of regular (Set in this case) items.

Extra little info-pages to explain abbreviations and other game terms are also continuously added as we go along, but since I’m no expert on these, please feel free to help out to explain them to new players (like me) by filling them out a bit (if you wanna help, check out this thread as well).

The first ever set of items added is, as you may have guessed, M’avina’s Battle Hymn, an Amazon-only Item Set.

As a set of items used for playing in Hell difficulty, it’s not considered completely up to par with some other

Runeword alternatives, but if nothing else, it looks fecking cool with the (harmless) aura lighting your way to fame and fortune.

If you know of a good use for one or many pieces of the set, don’t be afraid to add a paragraph or two explaining the use to other players. The same goes for the many more items and item sets that will be added shortly (you won’t break anything and if you do, it’s easy to fix). 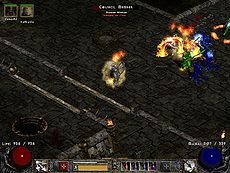 Each of the pieces of the first set to be made have also been given their own article space:

What do you think of the new little tooltip/infoboxes then? Any important stat we forgot, or some design option we might use to make it look better?