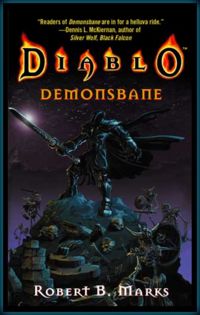 I have finally read once more my copy of Diablo: Demonsbane.  Everyone that knows me, know I go all nerdy with lore, and compile in-game lore as well as official Blizzard novels lore.  I humbly wrote down a few notes of the most relevant lore in this book written by Robert B. Marks. He is better known by many as Garwulf— of Garwulf’s Corner fame.

Diablo: Demonsbane was the first book in the Diablo series in the shape of a novella, when the era of eBooks had just taken off back in 2000. Although, it didn’t get past the hundreds of sales, due to the early phase of eBooks booming, it was a very good story based in the Diablo universe. It is not known if it is considered canon at this point.  Blizzard Entertainment has been silent about Diablo lore dodging our lore inquiries and possible future Diablo novels.

If this ends up being canon, it would certainly make many fans happy if they find any piece of lore about

Vizjerei in the tomes of lore (Sound clips) found throughout the lands of the world of Sanctuary.  The timeframe of the story might conflict in some areas of the lore and might get retconned if the story is considered canon.  It happened two years after the death of

Bartuc the Warlord of Blood, during the

Strangely, Diablo: The Sin War Trilogy didn’t even mention Bartuc, nor Siggard. Only time will tell. For now, we invite you to read our summary of Diablo: Demonsbane.

If you wish to buy this story—which ranges around 75 pages—it can be found in printed media within the Diablo Archive at any online or local bookstore.  It collects four of the novels based in the world of Diablo. Feel free to contribute to the DiabloWiki.net

WARNING!
As any summary, this is naturally a huge spoiler. If you are planning to read the book and have a problem with getting it spoiled for you, don’t read the summary.