Thanks to The Eliminator for pointing us to IGN Comics, where the first review of the first issue of the Diablo III

Sword of Justice comic book series is now online. The review doesn’t sound super-positive, but the review score is 8.0/10, which is pretty good. A quote: 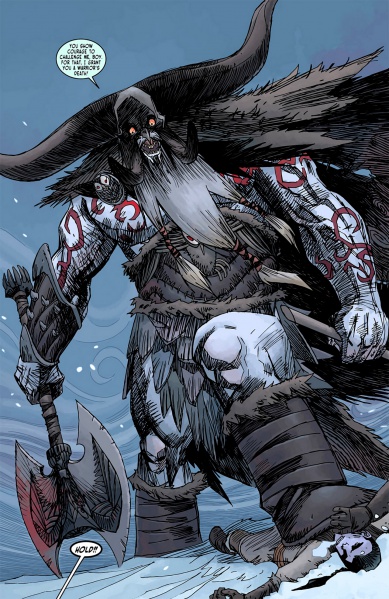 Diablo #1 isn’t what one would call a rousing fantasy epic. Where it succeeds is in terms of characterization. Writer Aaron Williams displays a knack for dialogue. His execution ensures that Jacob comes across as more than another fantasy hero of humble origins. The frequent humor also helps lend this story a distinct voice of its own. The book is somber when it needs to be a slightly silly in other spots. Not unlike a lot of Blizzard games in that regard.

The art style doesn’t necessarily evoke the Diablo games, either. This is probably for the best, as whenever adaptations struggle to capture the look of the source material readers usually wind up with the hideous CG visuals of God of War or the “crosshatch like it’s 1993” approach in Gears of War. Joseph Lacroix’s pencils are fairly loose and scratchy but packed with plenty of energy. The real star is Dave Stewart, who proves why he’s still one of the best colorists in the business.

There’s not much about Diablo #1 that overtly cries “Diablo!!!” But it is a satisfying read, and that’s something far too few of the projects can ever claim.

More details and sample images can be seen in the

Sword of Justice article in the DiabloWiki. Issue #1 had a street date of November 23, 2011, so it should now be available in your local comic store, or via online purchase. I’ve had a chance to read it and it’s more interesting/less cliche than I’d expected. Not just the typical fantasy, “young man finds a weapon and becomes a hero” story; at least not in issue one.

The only info in the comic that impacts on the Diablo III story is hinted at in the sample image I included above. That’s a Barbarian as seen in the comic, and while the protagonist is a young man of a Northern Tribe, but he is not a Barbarian. His people live in fortified cities, with strong walls to keep the Barbarians out, since they’ve become wild and feral and murderous in the twenty years since the destruction of Mount Arreat ripped the heart out of their civilization.

If the state of affairs in the comic ties directly into the plot of Diablo III, then it seems like

Bastion’s Keep, a major plot point and key area in Act Three, will probably not be a Barbarian fortress, but one maintained by some other peoples — who may even regard the Barbarians as their enemies. By that light, if there are Barbarian NPCs seen in Act Three, they will probably be roaming wilders who are a bigger danger than the demons?