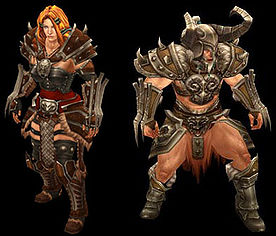 The issue of gear sets and the items that make them up is beginning to seem unanswerable. We’ve known there are 18

Gear Sets for a while now, and that characters in full sets will have a very cool, unified look. Each set looks totally different on each class, and human sexual dimorphism requires some minor tweaks between the genders.

That’s fine. The question some of us *cough* keep trying to to drill down to, is how many actual items of armor are there in the game? It seems likely that there are 18 different pieces of body armor and that they form the base of each of the 18 different gear set looks. But are there also 18 different shoulders, bracers, belts, gloves, boots, pants, etc? Or are there say, 6 types of belt, all of which vary slightly in their in-game appearance depending on which body armor your character is wearing?

@Diablo fielded a couple of tweets on that subject earlier this week, and answered them… without exactly answering the more specific question. Here’s a partial quote:

When you say 18 sets you mean 18 different boots, leggings,etc? And does that 18 include unique armor or are they totally different?—Theeliminator2k

They’re visual tiers of gear, not actual specific items by name and stat. It’s the same as Diablo II, but more and better.—Diablo


Realizing that was unclear, perhaps after reading the confusion expressed by people like me, yesterday saw a second @Diablo reply to The Eliminator’s tweet.
To clarify, there are 18 complete tier looks. Complete. 18 individual looks for each item slot.—Diablo

That’s cool, but it still doesn’t answer the question. We know there are 18 complete different looks for each char/class, and that each item changes in the in-game appearance. But are there 18 of each and every type of item?  Admittedly it’s kind of an academic question, but as it keeps not quite being answered, the urge to keep asking it grows like a rash. Itching under its weight, I asked Bashiok directly yesterday evening, and got… you guessed it, clarification that didn’t clarify. Here’s a tight paraphrase of his words, as I posted them in our ongoing forum thread:
Bashiok: There are 18 tier sets. Each one is a full set. There are different visuals for each class with some tweaks between M/F. There are 18 different looks for every armor piece for every class.

I think he’s saying that yes, there are 18 different versions of each item. But saying there are “different looks” for the armor, instead of saying something like, “18 different types of each piece of armor” makes it sound like he’s again speaking of the appearance of the character in the game, rather than the actual items equipped in the

At any rate, I’m tired of worrying about this and am ready to move on. Final points. 1) this is a minor issue that’ll be resolved the first day of the beta when some of you technically-gifted guys rip into the game code to extract the item spreadsheets. 2) The fact that Bashiok has tried to answer this question multiple times and that we (well, some of us) remain unclear may reflect some essential change in the item type/look paradigm in Diablo III that doesn’t translate to our Diablo II-based mindsets.