Rapid Fire) is that the game build is several months more recent than the earlier beta build was. This allows testers to see all the new and improved skills and features, but also shows off lots of other feature improvements and upgrades that aren’t actually playable. Yet. 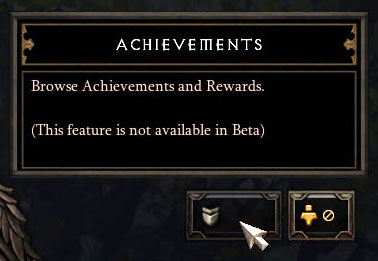 Our various community code diggers have posted lots of these in the beta forum. Most of them are quite spoilery, but the changes to achievements, account profile, and player stats are not so specific. Or spoilery. Read the post by RisingRed for full (non-spoilery) details, but here’s a summary, with some added info. As always, things can and probably will change somewhat before the game’s release.

Achievements in Diablo III are very similar to achievements in Starcraft 2, in terms of the UI’s functionality. The Achievement window (displayed on the lower right in-game; click the thumbnail for the full view) displays a summary of recent achievements, which you can arrange by type, whether or not they had a reward, etc. Achievement categories include: Campaign, Cooperative, Hardcore, Classes, and Combat, and you can filter the display by any of those options.

There’s also a “showcase” feature that determines which of your Achievements will display on your Battle.net banner. Only so many achievements can be displayed at one time that way, though the game will keep track of all of them, of course. The full game display offers a progress bar that shows how many achievements you have earned so far, the maximum amount possible, and even breaks it down into percentages. 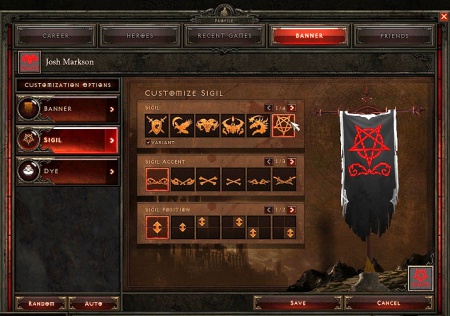 Banner of your Battle.net account are connected to Achievements as well, of course. As Blizzard discussed during the Blizzcon 2011 Gameplay panel, earning achievements will change the display on your banner. You can elect to show off achievements through the banner, and certain achievements will grant you additional banner doodads and geegaws. New colors, new sigals, new borders, etc.

It’s unclear exactly what all of those things are (Elite = SuperUniques?), and as RR said in the thread, it’s odd that the D3 team would spend years telling us they want to discourage boss running in the end game… and then offer us stats that track the kills of such monsters.

The current stat tracking is nowhere near as detailed as it is in WoW, or even what Torchlight 1 offered, but compared to what we had in Diablo II (NOTHING), it’s a big step up. And WoW didn’t add proper achievements until the Wrath of the Lich King expansion, so at least Diablo III is ahead of that curve.

There’s no full or even partial list of Diablo III achievements yet, but as the developers have repeatedly said they want to include lots and lots of them — hundreds — if you can dream it up at this point, you might well see it one day.