It’s funny how perceptions differ. Most old school fans of the Diablo series remember most fondly the dark

horror vibe established in Diablo I, and lament the loss of that moody aspect in the more fast-paced Diablo 2. Such fans have read, with cautious skepticism, the various comments by the D3 Team that they’re patterning Diablo 3 after that aspect of D1, and that they hope to get more of a horror movie feeling to the game. Yet not everyone remembers the first two games that way, as evidenced by this post in the B.net forums that garnered a quick reply from

I am curious, will Diablo 3 have a mature rating? I can’t remember if Diablo 1 had a mature rating but it added a lot of good atmosphere feel to Diablo 2. If you can remember while running in the Catacombs before Andariel and seeing bodies on torture mechanisms with their intestines hanging out. That was some amazing work.

Bashiok: We’re planning for a Mature ESRB rating, which is what Diablo and Diablo II were rated. Of course the translation of that rating to the systems used in other countries may differ. 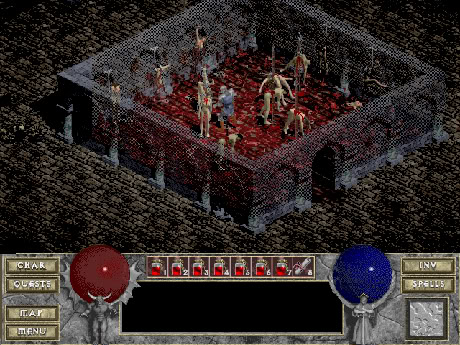 I didn’t think I’d ever see someone pine for the dark, gruesome style of Diablo 2 over the thematic approach of Diablo 1, but once again the users of the Battle.net forums have proved that nothing is impossible.

Incidentally, the M-rating issue was discussed in much more detail by Game Director

Jan Wilson in an interview from last year’s Blizzcon, if you’d like to learn more about it, and why German people can’t buy games that show a lot of blood.