Blizzard gave a twitter reply to an oddly-formed question. It’s not much, but it’s what passes for a progress report at this point, so try and enjoy.

I heard you were finishing up the first chapter of the game, can you say where are you now? please feed this hungry Diablo fan! D:—TeslaFalcon

Work doesn’t focus on any one specific area of the game all at the same time. But everything is going swimingly!—Diablo

Taking the question more comprehensively… there’s really no telling how far along they are. Any questions asking for a % completed are met with a reply like the one above. Which is honest, if not exactly forthcoming. The devs have said that they’re in the “plugging in content” phase since late 2008, but there’s a lot of content, and it’s all got to be balanced and fitted together, which is a chore that doesn’t correspond to a rigid timetable. 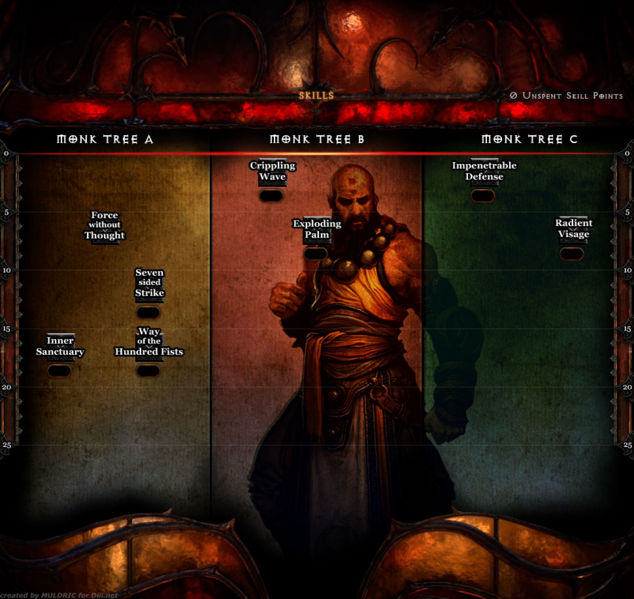 The most visible thing to us outsiders is the progress on the characters. The

Witch Doctor were introduced in June 2008, and the

Wizard was added later that year at BlizzCon. At that point the Wizard was much further along than the WD, who only had a dozen skills in the build. By last year’s Blizzcon the WD had about 30 skills (same as the Wiz and Barb) and the

Monk was introduced with just his 8 known abilities. It’s a fairly safe bet that the Monk will be up to his final number of skills by this year’s BlizzCon, and that the

Fifth Character will debut with a cool look and a handful of representative abilities.

By that you could say that the characters are more than 80% complete now, but as anyone from Blizzard would point out, progress can’t be calculated that way. Skill balancing will continue right up until launch (and then continue in patches), and major character properties keep getting tweaked (

Fury was recently said to be undergoing modification). While it’s clear that they’re making good progress, changes in one area always necessitate adjustments elsewhere, which can cause unforeseeable delays. As always, the best advice is to be patient and trust that we’ll see a great game… eventually.