A fan brought up an issue that’s been one of the most popular discussion topics in our forums for well… years. What character class(es) might we see in the Diablo 3 Expansion(s)?

What class would you like to see in the future can not be any class already in any of the diablo games so something new.
Bashiok: I’m in no way aware of any future ideas or plans for classes that may or may not be considered for the future … I wish I was! But I’m not. 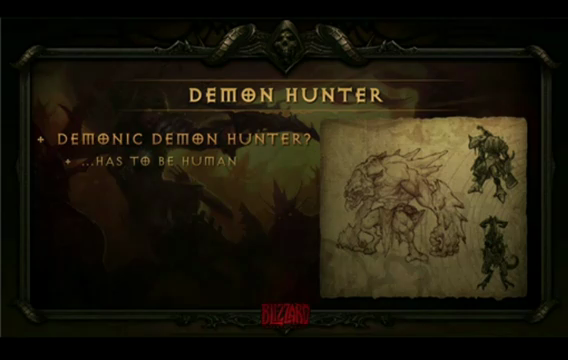 That out of the way, personally I really like the idea of demonic or angelic ‘inflicted’ class. It was something we explored with the Demon Hunter, who at one time had a demonic arm (reference BlizzCon 2010 gameplay panel for visuals). I think that’d be interesting to explore, especially on the angelic side. I’m really into Paladin/holy warrior classes, and that infused with angelic powers and visuals would probably be pretty close to my perfect class I think. I just don’t really know what implications that has on lore.

The monk hits it pretty close, though, and the barbarian is definitely out for noble (if not selfish) causes. I’m personally in love with each of the five classes we have right now, and am still torn on which one to play first on launch day… (leaning towards WD)

You guys often give Bashiok grief over his theory-crafting efforts, but I think his ideas here are pretty good. He didn’t mention it as evidence, but many fans have pointed out the lack of any shield-based combat skills in Diablo 3, and obviously some sort of Paladin-esque hybrid melee character would be a great way to incorporate those in D3X.

Incidentally, if you weren’t following D3 during 2009-2010, trust me when I tell you that the “what is the next char class?” question drove an incredible amount of debate. Check the Other Classes article in the Diablo Wiki for archived evidence of that. You can even see it in the hit counts, as that article has more than 200k views, which is a drop in the bucket for total DiabloWiki views, but is still more than any of the other class pages. And I will guarantee that in a year or two, once

D3X is approaching, we’ll see much the same frenzy of debate on this topic.

So what class do you want to see added next? And no, you can’t just say a Druid/Paladin/hybrid/shape-shifter. That’s too vague, and you will no receive credit for your submission.